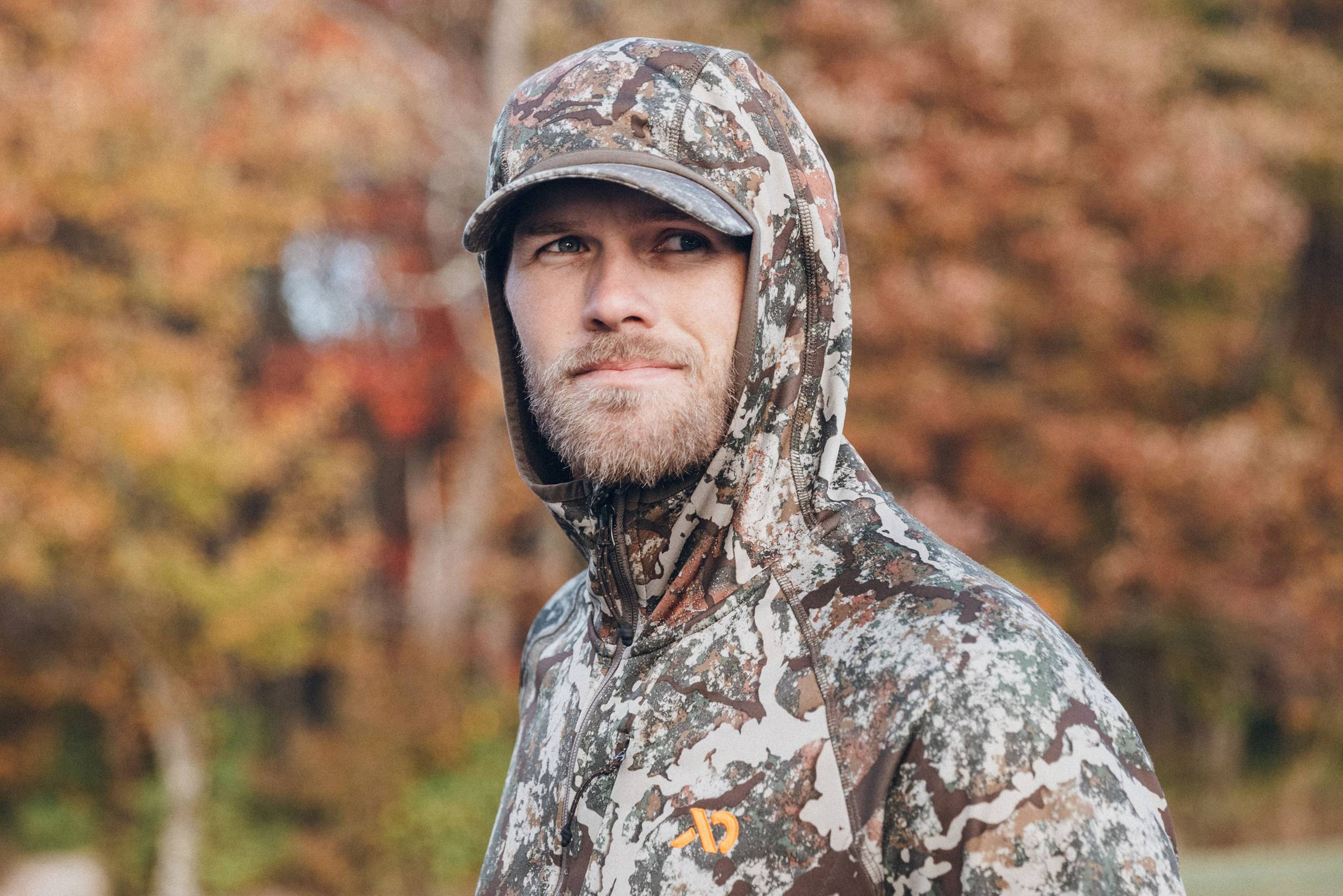 We spoke with First Lite ambassadors about Specter camo’s inception, evolution, and utility for hunting year-round in whitetail habitat.

First Lite spent 3 years tinkering with its whitetail-specific camouflage pattern, called Specter. Its unique mix of patterns is designed to break up hunters’ silhouettes from afar and within shooting distance.

“Deer see a lot of colors in tones of gray, but you want those tones to work with what’s around them,” said Gregg Farrell, First Lite’s whitetail product line manager.

Farrell oversaw the development of Specter, which debuted in spring 2021. The pattern continues to find its way into new First Lite apparel made with whitetail conditions in mind, as well as products of partners like Mathews Archery.

Stalking Whitetail to the East Coast

Effective camo isn’t about blending into the natural background from a human perspective — it’s about breaking up human outlines from an animal’s perspective, Farrell explained.

First Lite’s roots are in Western hunting and its first proprietary camo pattern, Fusion. That first pattern was designed with timber and shaded areas of the Western U.S. as a major part of the equation. First Lite followed that up with Cipher camo, using the same algorithm, but adjusting the palette and pattern for more open landscapes. For instance, you’ll see fewer greens and more browns.

As the brand expanded, it started making gear with whitetail hunters in mind. Namely, it was made for more start-and-stop activity because Eastern hunting often involves sitting in treestands. Once you’re there, you’re not moving much to create warmth.

Initially, the whitetail lineup used the Fusion and Cipher patterns, which were effective enough, but the camo was never optimized to match whitetail environments.

As the line grew, First Lite set out to find a whitetail-specific camo pattern. It changed up its algorithm to account for the varied landscapes throughout the season, which of course, includes everywhere east of the Mississippi and then some.

The colors in the Specter pattern are meant to blend in during a November Iowa hunt as well as later seasons in South Carolina.

Farrell said the first consideration was how a whitetail sees you up in a tree versus how an elk sees you at eye level.

“How does that engagement angle affect how a camo pattern works?” Farrell asked. Bundled into this is the fact that, despite their best efforts, hunters typically have some sort of skyline behind them.

The second element was the engagement distance. In short, a macro pattern breaks up your form at long range, and a micro pattern diffuses when the deer is within range.

“You need both. If you’re sitting on a food plot and your target buck walks out at 300 yards, you need to make sure he can’t pick you out in that tree,” Farrell said.

“If all goes well, that buck’s within 50 yards, hopefully within 20, and you need that micro portion of the pattern to do its job there so you’re able to draw your bow and get that shot off.”

From Paper to Treestand

Farrell walked us through the process from ideation to realization in the field. For this pattern, it took roughly 3 years.

The idea starts on a piece of paper. Then it goes to a computer, and there are certain things product developers can do at that stage in terms of proving out things like Pantones, ratios, and portions of the pattern in a garment. Using design programs, there are ways to mimic how a camo looks to a deer.

The second step is lab testing, which submits the textile itself to abrasion and waterproofing standards.

Farrell has a common refrain: “A deer’s never been killed in the laboratory before.” And so First Lite put its new pattern into the field for two full hunting seasons, with employees and ambassadors providing feedback throughout.

It turned out the lab testing got the pattern pretty close to where it needed to be. The feedback brought about some minor tweaks to a few tones based on how they looked in different lighting.

If this all sounds a bit like overkill, the brand isn’t claiming this is a surefire way to land your trophy buck. Farrell said he knows plenty of deer have been killed while wearing Cipher and Fusion patterns, not to mention less-camouflaged apparel.

“I’m not naïve. A lot of people kill deer in Carharrts and cotton sweatshirts every day,” Farrell said. With the Specter pattern, “we’re talking gains of percentages.”

Farrell’s own experience in the Specter camo provided new feedback. “You have that moment of the deer looking right at you, but you can tell it’s looking right through you. You get away with stuff you didn’t before,” he said.

And as testers reported back, the pattern enabled them to come back from getting busted ranging a buck or drawing a bow.

Levi Morgan is a world-champion archer, lifelong hunter, and First Lite ambassador. He’s spent much of his life afield in a variety of camo patterns and always noticed that how they look on the rack went out the window when he was in a tree.

With this Specter pattern, it was different. Morgan said people blended in from 500 yards out and all the way in.

Morgan’s first field test came on a trip to a lease in Nebraska where he’s hunted with other First Lite ambassadors in years past. There, most of the trees are cottonwoods, and good cover is hard to come by.

“Something about the does in Nebraska on this specific lease … these does will not let it go,” Morgan said. “Last few years, once they picked you out, they’d snort and run back to the bedding area, come back in and snort again, and just ruin your day.”

That changed with Specter, Morgan explained. Whitetails would come in under the stand and stare but eventually walk away.

“Where we could never beat that staredown out there, we instantly started winning those little battles. That was a big ah-ha moment for me — this really is different,” he said.

Since then, he’s been all over whitetail country in it and praised the pattern’s ability to blend in while taking cover in different trees.

This article is sponsored by First Lite. Find out more about its Whitetail collection using the Specter camo pattern.

The First Lite Specter camo design takes multiple approaches to obscure a hunter’s form in the eyes of whitetail deer. The brand says it disrupts deer’s depth perception and peripheral vision in a field or treestand. Read more…
This article was originally published by Gearjunkie.com. Read the original article here.
Share on Facebook
Share on Twitter
Share on Pinterest
Share on LinkedIn