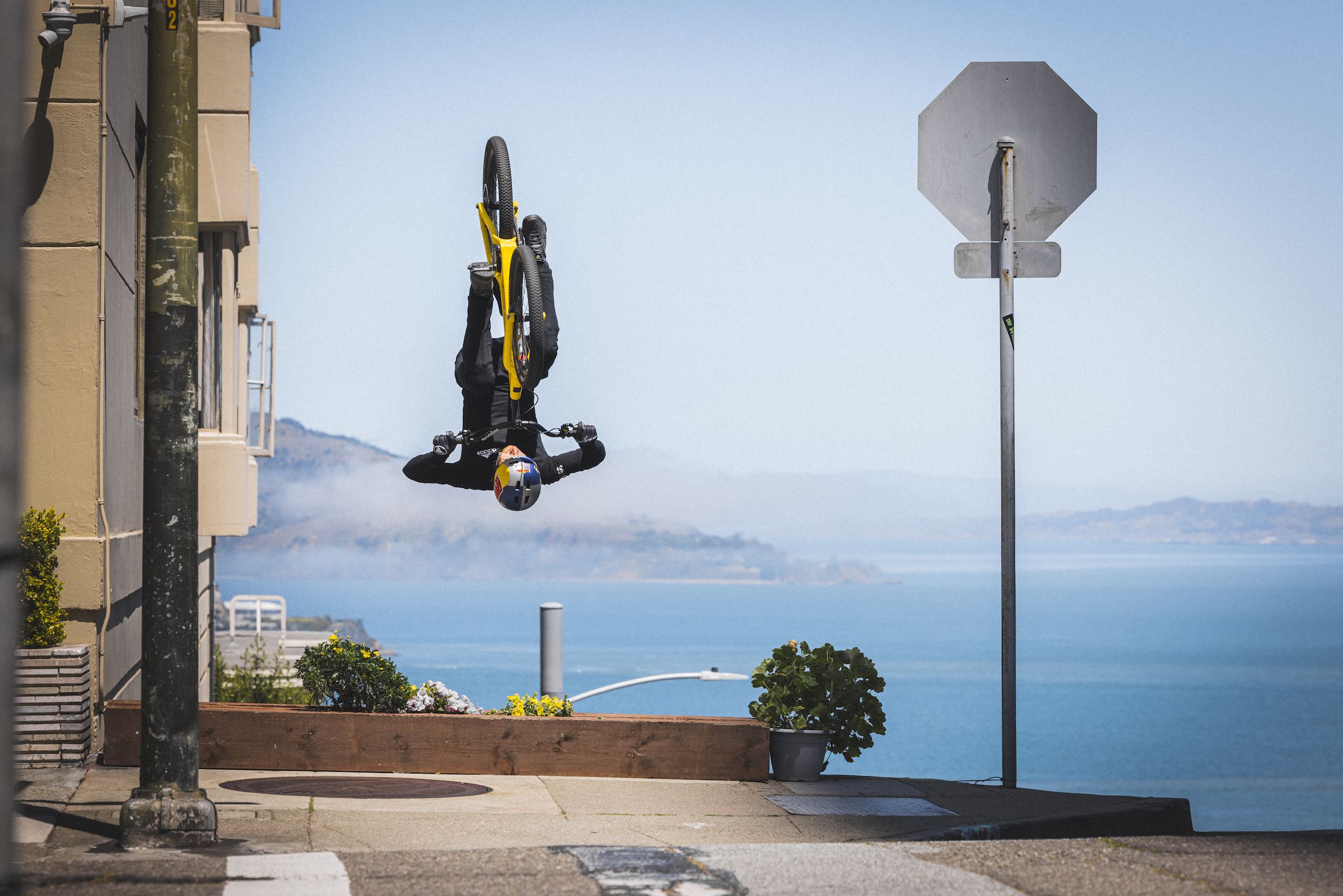 The day Danny MacAskill dropped his ‘Postcard From San Francisco’ video, he set aside time to answer every question we could throw at him. Here’s what the world’s best trials rider had to say.

GearJunkie: What did you love about San Francisco?
Danny MacAskill: It’s kind of a cliche answer, I suppose, but getting to go out to Alcatraz was pretty cool. It’s quite an amazing place; little bit sinister. We filmed in Chinatown, and there’s a really iconic skate and BMX spot up on this bridge. We, of course, sampled some of the amazing Chinese food as well. 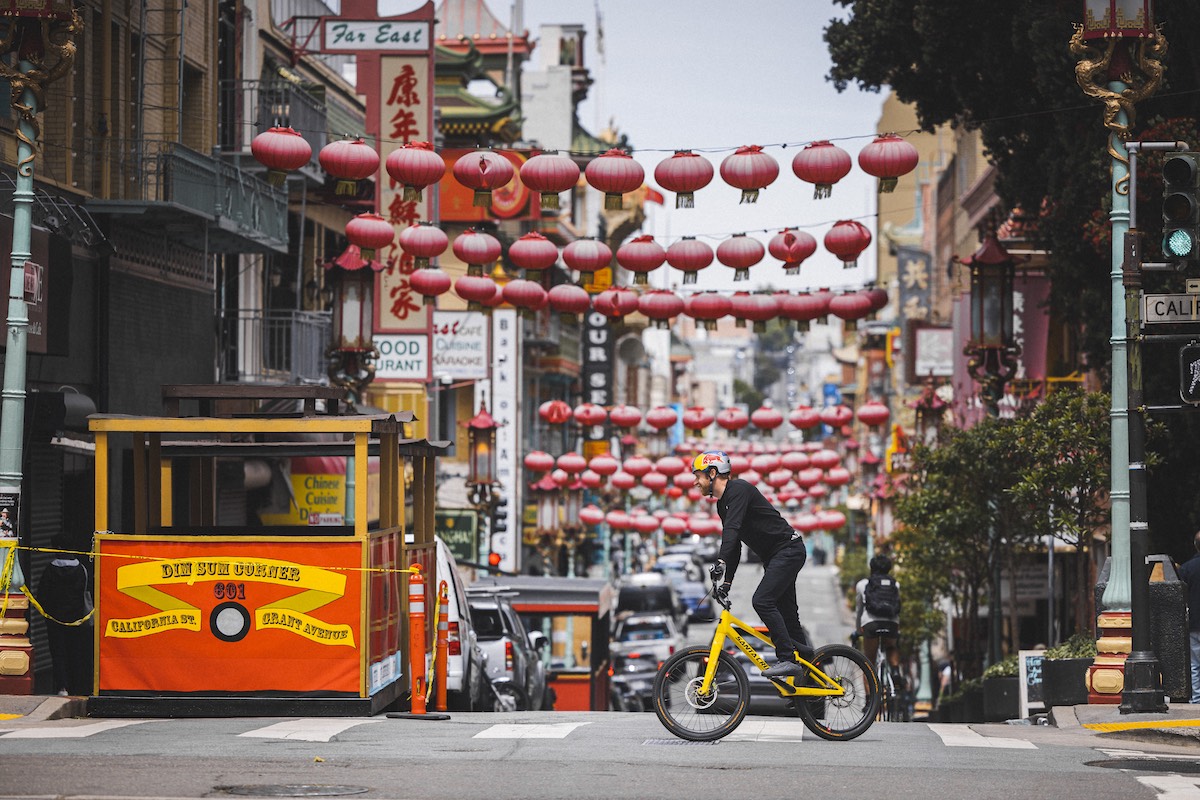 Do you train specifically for your riding, and how do you do it? Weights? Trampoline? Gymnastics?
If I’m honest, I don’t do any weight training at all. My training is primarily riding. I ride the trials bicycle easily for one or two hours a day just for fun. And these days, what I try to get a lot of is my e-mountain bike — my Santa Cruz Heckler. (Santa Cruz is the current bike sponsor for Danny MacAskill.)

I do usually one or two batteries a day and sometimes three or four batteries. That way, I get to ride so much downhill. It’s pure, fun adrenaline and it keeps me physically feeling good, and it’s less punishing than my trials bike. Then when I get back on the trials bike, I feel like I could rip the handlebars off! 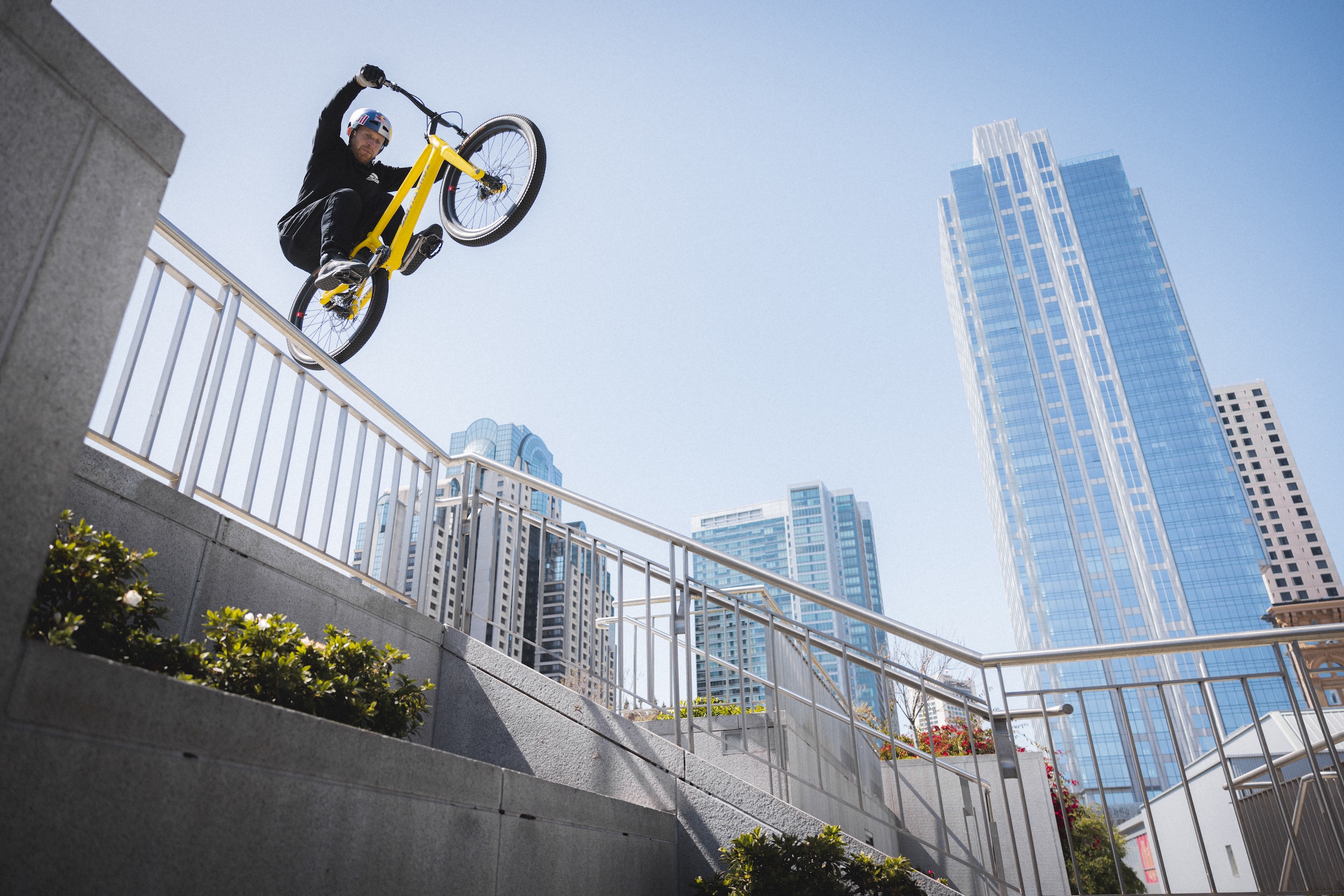 Do you rollerblade?
No, I’ve never rollerbladed. Where I grew up was a little too rough on the ground for rollerblades. That’s how I got into bikes instead.

You grew up on the Isle of Skye. How did your upbringing there affect you?
I lived in a small village of only around 200 people. There’s only one high school on the whole island. That gives Skye a really cool community feel. Because we either grew up together as kids or, you know, families all over. It’s pretty cool to be able to travel the world and get to see new places and cultures, but I still spend a lot of time back home.

What’s your favorite thing to do except ride bikes?
I am completely addicted to surfing the internet looking for music on YouTube. The current genre I align with the most at the moment is early ’90s trance and techno. There’s a lot — a lot — of cool stuff in there. I highly recommend using the YouTube algorithm for music searching. It’s like having a DJ serve you up amazing tracks you would have never found otherwise. 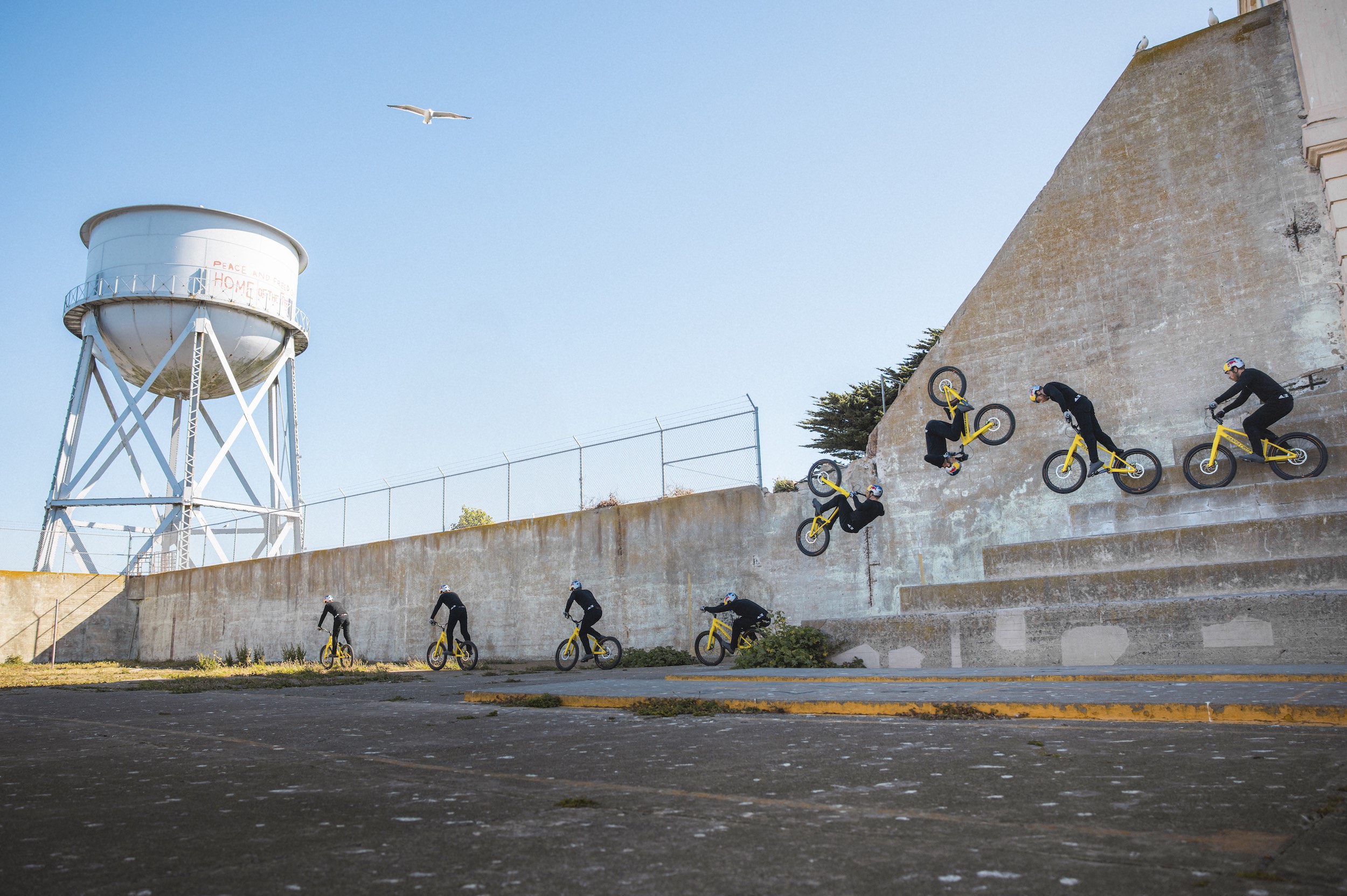 What’s at the top of your playlist right now?
Desire (Icarus Mix) by Icon. It’s got an amazing vibe. It’s a little faster than most stuff I’d listen to, but I like to think about what it would have been like in the clubs back in the day — or even to this day. It’s an immense track.

Did you always like riding, and do you remember your first bike?
The bicycle’s always been something I’ve been into. I was always quite an active, or maybe more hyperactive, kid. I’d be climbing the trees in my garden, climbing all over my house, jumping off the highest walls I could.

I kind of took that energy to my bike when I was young. My friends and I used to use our bikes to cycle around the island and to school. I used to have, like, a course on my way home: all different curbs and banks and driveways. I’d just be jumping off everything I could find, racing my friends home. It was good fun. 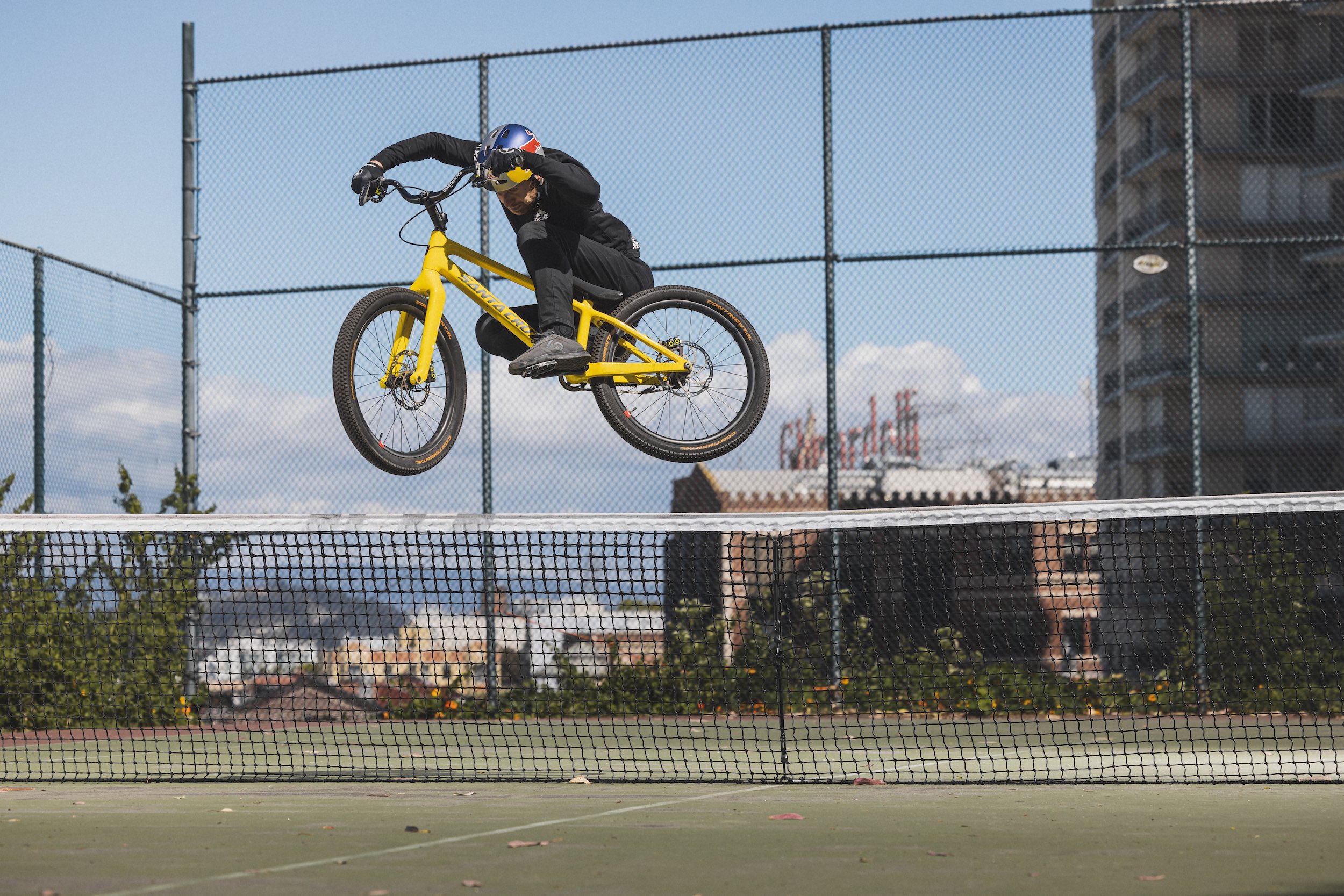 Do you ever just ride in the bike lane?
My commuting is going out to ride my e-bike in the hills or my trials bike in the streets. So I’m not often riding “A to B.” And if I’m honest, I don’t often use my bike to go to the shops in Inverness because everything I have is really somewhat too fancy to lock up. I should really get a bike I just use to commute.

How do you get in the right mental state to do high-injury risk tricks?
I actually use music as a kind of tool to trick my brain — or to distract it — from what it’s thinking. You’ve got the rational side that’s thinking about having already learned the trick. Maybe you’ve learned it on mats or with a foam pit. But then, on location, the instinctual part of your brain’s going bananas! Thinking you’re going to hurt yourself, you’re cold; it’s wet, you’re tired. You’d rather be back in bed.

So I play tracks like Industry by Nathan Micay. I basically wait for the coolest part of the track to come in, and I try to use that in my head like a start gun — to try to trick my brain to get rid of some of the fear and switch it into commitment mode.

Worst injury you’ve had? Worst injury you’ve avoided?
Back in 2009, I tore a disc in my back, dropping off a 12-foot drop to flat several times. I didn’t actually notice it at the time. But then I broke my collarbone three times in a row over the next six months. My core really weakened, and then my back went to shit.

The worst injury I’ve avoided? You’re facing falling to your death enough times that that’s not really in the equation anymore. But I’ve probably jumped 18 or 19 feet to flat before, fallen off my bike, and been fine. 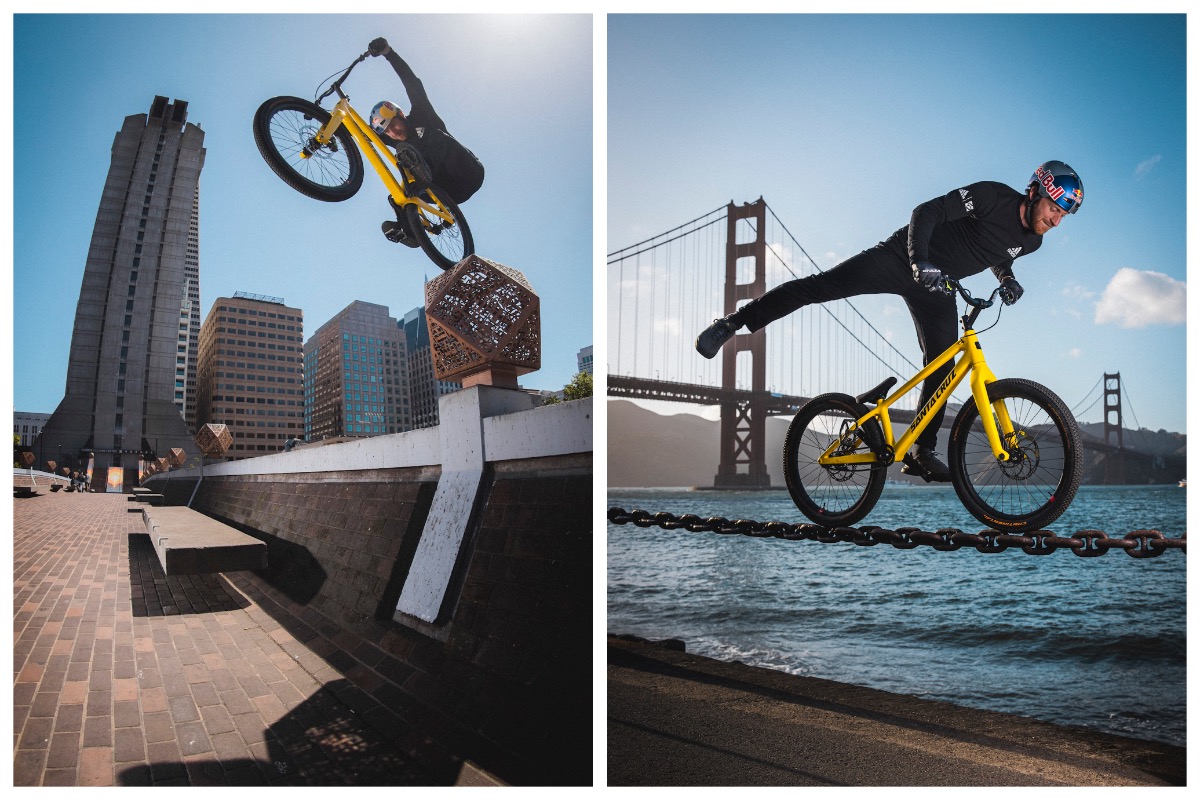 Any rider you’re watching super closely?
Ryan Williams, who rides for Nitro Circus. Every day he blows my mind. He does timeless things. I recommend him as a follow — I can’t even describe the tricks he’s doing. Bike flip front flips? All sorts of crazy stuff.

Who is your favorite athlete to watch in any sport?
That is a good question! For me, it’s a motorcycle trials rider called Toni Bou. Completely mind-blowing. Have a look on Instagram.

Is there anywhere you haven’t ridden but really want to?
Japan, for sure. I’ve always meant to go over there, but I’ll get there one day.

How much did you and Red Bull have to pay to ride in Alcatraz?
I don’t know exactly, but I had to return there three times because I couldn’t land the trick! So whatever it was, we might have had to pay it a few times.

Thank you, Danny MacAskill, for your time!

Impossible Tricks by Danny MacAskill on a 50-Pound E-Bike