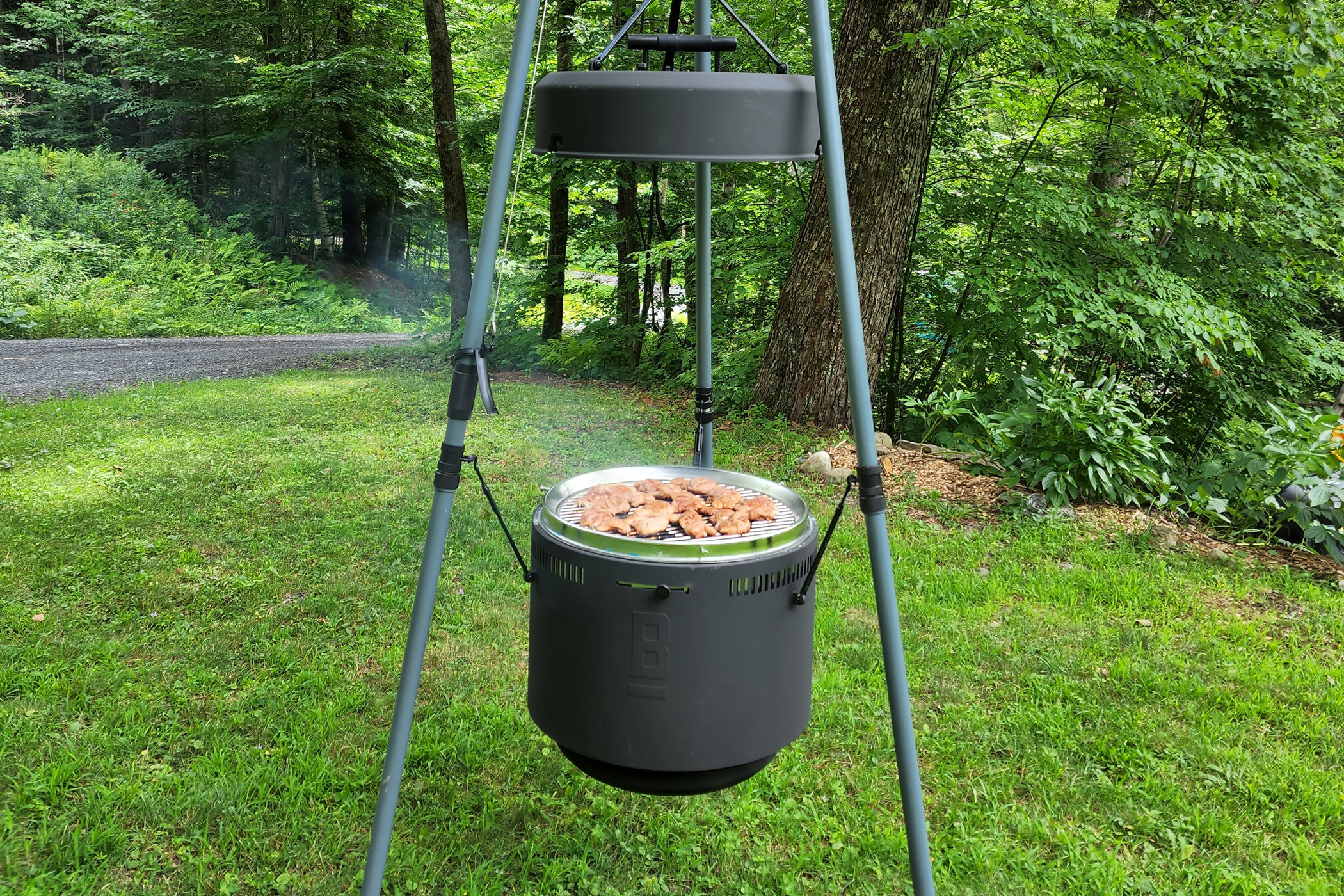 Not only will Burch Barrel’s wood-fired smoker grill burns wood or charcoal to accommodate your grilling preferences, but it’ll also be the biggest attention-grabber at your next cookout.

Born in Big Timber, Montana, Burch Barrel founder Roby Burch made his first iteration from chains, pipes, and a 55-gallon barrel. He conceived it not just as a cooker, but as an anchor to any social gathering, a place that people could gather around that’s more multifunctional than a fire pit.

The Burch Barrel V2 is more refined than Burch’s original creation. It has a double-walled, cold-rolled carbon steel barrel suspended from a powder-coated tripod.

The barrel is covered with a lid that slides up and down on a cable with a pistol grip. Burch Barell V2 is a grill that encourages people to sidle up and check it out, with an aesthetic somewhere between cowboy and caveman.

We tested the V2 to see who it’s for, and if it’s worth the investment.

In short: At 81-84 inches tall, with a tripod footprint of 60 inches, it makes a statement, claims its turf, and is always a topic of conversation. It’s an eye-catching lawn ornament, as well as an amazing tool for grilling and smoking meat and vegetables.

The coal pan has a handle that I could lift wearing a leather fireplace glove and using a metal bar with a hook on the end, not included. Steps welded into the barrel let me pick how close or far from the grilling surface I wanted my coals.

To adjust the coals I needed to raise the stainless steel grilling grate (and my food). With a little practice, it latches onto the lid so that I could raise the food away from the coals to control the cooking or smoking temperature, or to mess with the fire.

Clipping the lid to the grill surface was somewhat challenging when the grill was hot, though I got better at it the more I used the grill. Vents on the lid gave me additional control over my cooking temps.

Using the Burch Barrel, I grilled chicken and seared steak over a hardwood fire. Both turned out super tasty. I roasted potatoes, cooked onions and zucchini, grilled salmon, and steamed corn in its husk.

The Burch Barrel sears, slow cooks, and everything in between. A thermometer in the lid helped me monitor the grill temp. Using the grill vents, I could control airflow, so I could smoke my dinner when I wanted to, or cook on high heat.

Cooking on the Burch Barrel takes attention and some skill. You can’t just push a button and turn it on like a gas grill.

Because the grill has a lot of adjustability, it’s helpful to know what you’re doing and have some understanding of grill heat, and how changing airflow affects the results.

The grill cooking surface has to be perfectly level or when you lower the lid, it hits the grilling surface and can dump your meal into the coals. Spanner bars that attach the barrel to the tripod screwed in and out to let me level the grill surface. Legs and feet also adjusted.

When I moved the grill, I used a level to check its surface. Then I double-checked the lid by lowering it. I recommend lowering the lid to check for accurate landing before you start your fire.

A lot of grills have wheels or are light enough that they’re easy to move. Moving the Burch Barrel is a two- to three-person job because of the tripod, and also because the grill tripod and barrel together weigh 65 pounds (claimed weight).

Though the grill is technically transportable, once I got it set up, I was happy to leave it at home base.

This grill is overbuilt, extremely sturdy, and will likely last a lifetime. But in my experience, it wasn’t especially easy to move.

Considering the footprint of the grill, the round, 18-inch cooking surface was compact — perfect for dinner for two when I was grilling meat and veg. The cooking surface was not big enough to grill for a crew unless I was preparing hot dogs or sausages and nothing else.

When dinner was done, the Burch Barrel made it easy to clean up. The removable coal pan made ash disposal easy. And once I dumped the ashes, the grill cooled quickly.

I’ve gotten used to most smokers and grills having work surfaces where I can set my food while I load the cooking surface, and where I can set grilling tools while I am tending my meal.

Burch Barrel does not have a shelf or wing. So when you cook with it, plan to have a small table on hand.

The flavor that comes with cooking over real wood is something you can’t replicate, and Burch Barrel made it easy to start a fire and to impart food with a delicious, woody, smoky flavor.

Nine ash pan positions let me control cooking temperatures, so once I got the hang of this smoker grill, my food was always perfectly prepared. And the Burch Barrel drew people in to hang out while I was cooking.

So even when folks had to wait their turn for food, it wasn’t an issue, and I never found myself grilling alone.

That said, this spectacle isn’t for everyone. Cooking on it requires skill and a certain attention to detail. On top of which, its nearly $1,200 price tag means it will likely find the most appeal among grilling aficionados who regularly choose to cook summer meals outdoors.