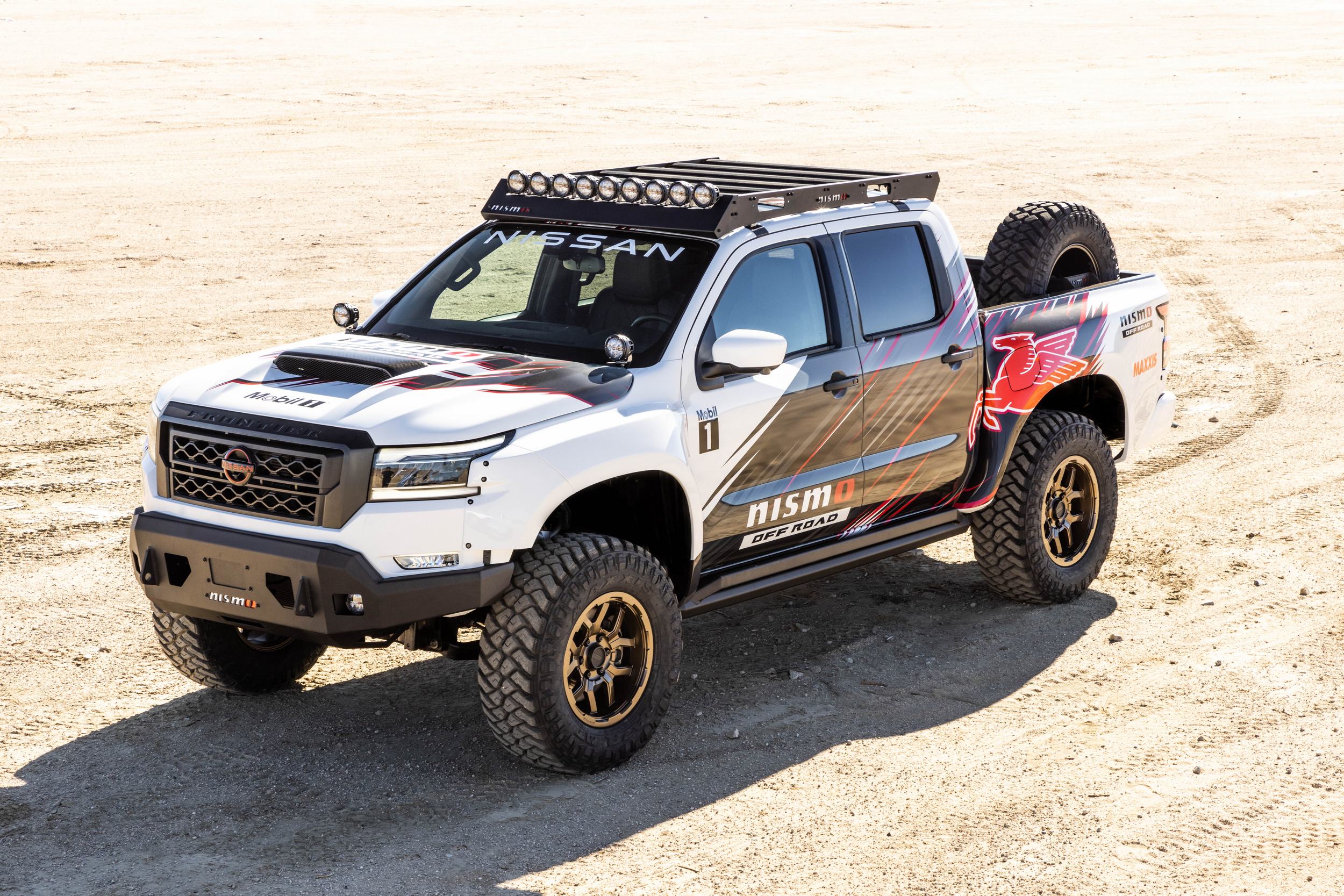 Nissan’s performance arm and Forsberg Motorsports build Nismo Off Road Frontier Concept to show off Nismo parts and give you Frontier ideas.

Wonder what the Nissan Frontier would be like with a V8? Or if a V8 could even fit in the midsize truck? Wonder no more, because Nismo is bringing exactly that to the SEMA show next week. It’s called the Nismo Off Road Frontier V8 concept, and it gets 5.6 L of Nissan Titan power.

SEMA, short for the Specialty Equipment Market Association, holds the largest aftermarket auto show in America every year in Las Vegas. Every custom and aftermarket parts company worth its salt shows up, and most of those companies bring their best parts. It’s a show so big that even the major automakers bring concepts and one-offs just for this event.

One-offs like this Nismo Off Road Frontier V8 turn a lot of heads. Under the hood is a 5.6L V8 taken from the Nissan Titan, a good match since the two trucks use the same transmission.

In the bigger truck, this engine makes 400 horsepower and 513 pound-feet of torque. For this application, the truck comes with a custom Nismo cold air intake and a cat-back exhaust, so it might make even more power. No matter the figure, it’s a big jump over the 310 horsepower and 281 pound-feet of the stock Frontier 3.8L V6.

The concept is more than just a big engine, though. It’s designed with off-road racing in mind and comes with serious hardware to back that up.

Nismo and Bilstein developed the coil-over shocks fitted in the front and the external reservoir shocks in the rear. A custom leaf spring pack in the back helps handle the extra demands that come with jumping the truck through the desert. The springs front and rear lift the truck as well, for a higher ride and more clearance underneath.

A big and mean-looking prototype off-road front bumper from Nismo lives between the front fenders and it is designed to improve the truck’s approach angle and tire clearance. It’s big on style, too, especially with the embossed Nismo logo sitting front and center.

To finish up the show truck’s looks, Forsberg Racing added two in-bed spare tire and wheel carriers. Nissan calls those prototype parts, the same label the company gave to the rock rails under the cab.

The roof rack, though, is a part we’re going to see at dealers soon. The same goes for all nine of those driving lights mounted to the rack and the pair mounted to the tops of the carbon front fenders — in case nine wasn’t enough.

Nissan said that the parts will belong to a range of Nismo Off Road accessory parts that it will put on sale soon. Which is the real reason for building the SEMA truck, to show off its wares.

If you’re going to be at SEMA, look for the truck in Nissan’s booth. It will be sitting alongside at least five other concepts, including a slammed Frontier mini truck concept and a classic Sunny pickup with an electric powertrain taken from a Leaf EV.

Katabat 12V Portable Oscillating Dual 4“ Fans with Clamp Mount
BUILDING A FORT IN THE WOODS – A Night at the Fort, Building and Cooking with 2 Dogs in the Rain.
Beginners Guide To Bike Packing Kit On Mountain Bikes
BEST camping food SECRET
Building a Saxon House with Hand Tools: THE PIT | Bushcraft Project (PART 2)