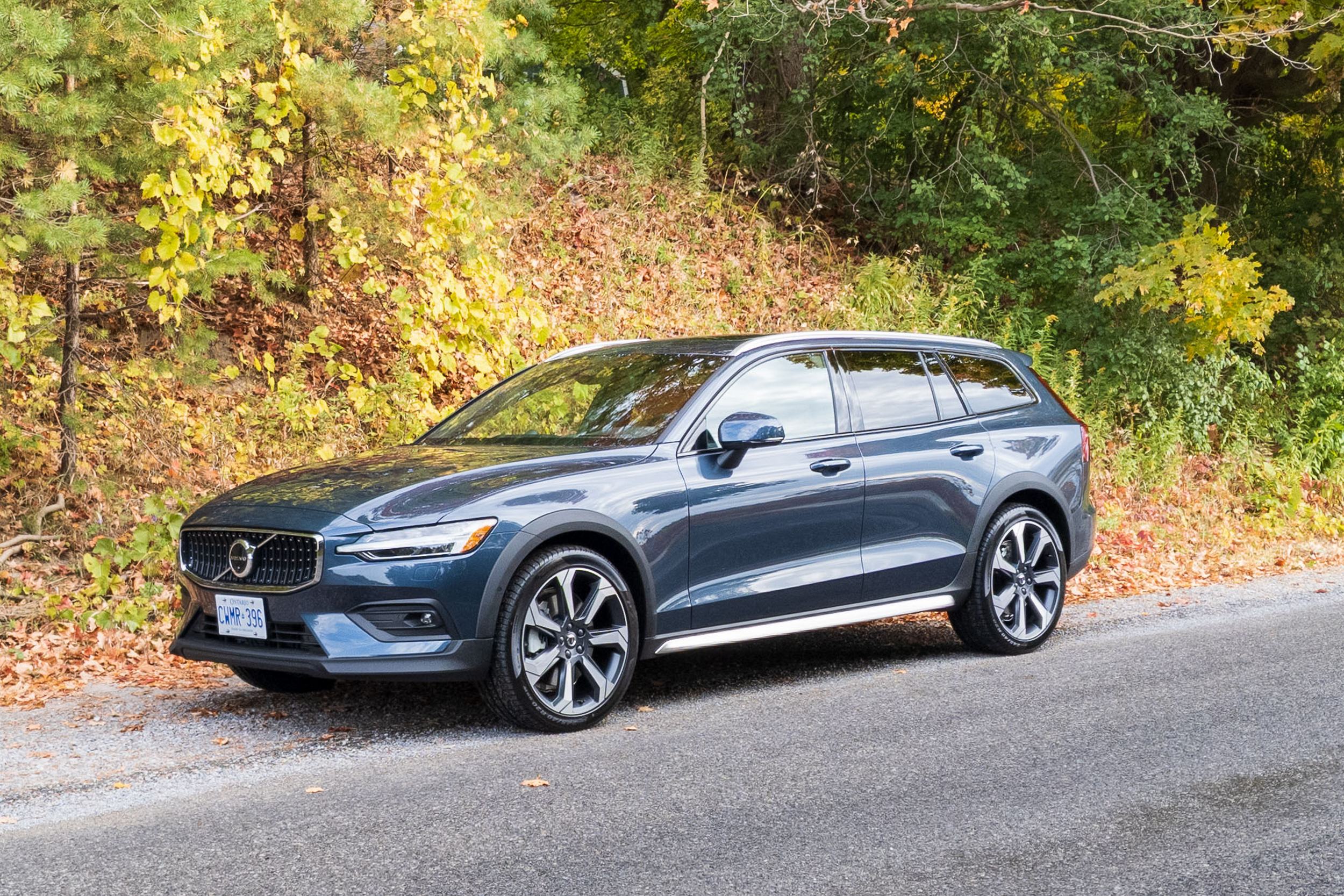 With a new engine, raised suspension, and voice control assist features, the Volvo V60 Cross Country is in top form on road and off.

The rise of the crossover might have nearly killed the station wagon, but not all automakers are letting the practical long-hatch die.

Volvo is a wagon diehard and is working to keep and capture buyers with models like this 2023 V60 Cross Country. It’s a wagon with a bit more ground clearance and some added protection if you’re planning on taking it down gravel roads or dirt trails.

We got to drive the 2023 Volvo V60 Cross Country as part of AJAC’s TestFest 2023. TestFest is a major automotive event where most of the year’s new and changed models are brought together. It’s similar to our usual first drives, but with the chance to drive a vehicle and its competitors at the same time.

Held each fall, the event is filled with mud, leaves, rain, and a range of driving and road conditions that are tough to find anywhere else.

Volvo updated the 2023 V60 CC, but the visible changes are small. The grille changes are so slight you have to park side by side with the old one to be sure. And there is some even more subtle rear bumper massaging. Under the skin, the changes are more significant.

A few years back, Volvo promised that it would be accelerating its move toward electrification. A big step in that plan was giving every one of its models that wasn’t already an EV a hybrid driveline as standard.

For 2023, Volvo has accomplished that. The hybrid version of the V60 Cross Country is now the only V60 CC. Badged B5 on the tailgate, this is the one we drove.

The Volvo V60 Cross Country B5 is a mild hybrid. Very mild, with a 48V integrated starter generator that lets the gas engine turn off more often in city driving. The engine is still a 2.0L four-cylinder with a turbocharger, a variant of the engine Volvo uses in almost everything it offers.

One of the lower-powered versions of the Volvo engine family, the B5 delivers 247 horsepower and 258 pound-feet of torque. That power figure is three horses fewer than last year, though you won’t notice the difference.

You’re more likely to notice the single extra mile per gallon in the city. Fuel economy is rated at 23 city, 30 highway, and 26 combined mpg.

The engine is quiet and smooth when you’re cruising on the highway or accelerating with traffic in town. Ask for more power and you’ll get plenty of it, but you’re also going to get a lot of noise.

Use the throttle and the engine becomes almost diesel-like in how much it rattles. At least the V60 is quick enough that you won’t need to use all those ponies for long.

Volvo Wagons Have a Long History of Hauling Plenty

A station wagon is about cargo carrying, and the V60 Cross Country does that well. With 22.9 cubic feet of storage behind the second row, it beats out similarly sized crossovers like Volvo’s own XC60, even if it is only larger by a couple of cubes.

The long and wide cargo area has a low lift-in height, too. Lower than most crossovers. The low height makes it easier to load and unload heavy or awkward cargo.

With the seats folded, the V60 Cross Country holds 60.5 cubic feet of gear, which is in line with crossovers in this class. This is a large space. Unless you’re loading to the headliner, you’re not likely going to notice the difference versus the competition.

Volvo includes some clever touches like cargo D-ring tie-downs, a small rear-seat pass-through, and plenty of optional accessories to make the best use of the space.

Volvo has been hitting it out of the park with its interior designs lately, and this V60 CC is no different. Somehow, the company engineers are putting together a space that is simple and shockingly complex; spartan yet warm and inviting. Yes, those are contradictions, but like Swedish home furnishings, the balanced proportions and soft lines combine to create a standout in the segment.

Details like the twist-control start switch and the Orrefors crystal gear selector stand out, letting the available driftwood decor blend in. This tester had buttery amber Nappa leather with a wood finish that Volvo calls “linear lime” that pops brilliantly, making this car feel seriously premium.

The steering wheel is not leather, though it looks and feels it. Volvo is working to move away from hides to increase sustainability with changes like this one. The automaker is also offering tweed-like textile seats as an option instead of our test car’s traditional leather.

Beyond looking good, the cabin is a comfortable place to be. Volvo’s seats are pleasantly firm and are adjustable in enough ways that nearly anybody should be able to find their right setting. Steering wheel controls are straightforward and so is the new infotainment interface, which makes the experience more relaxing.

Volvo went to Google to design its new multimedia system, so for Android users, the car should be immediately familiar. Even for Apple iPhone users, learning the system should be quick, thanks to the intuitive UI.

One huge perk of the system is the “Hey, Google” voice assistant control. This adds natural speech recognition and the ability to adjust vehicle settings including temperature and fan speed. Those control features make this V60 a step above the basic functions offered in most new cars.

Climate controls stay at the bottom of the tall 12.3-inch screen at all times, in case you’re not ready to move to voice controls. I normally prefer real buttons, but there is a physical volume dial along with some other quick-access buttons to balance the tradeoff between aesthetics and function.

It has 2.4 inches more ground clearance for a total of 8 inches, which improves approach and breakover angles and lets the Cross Country drive through deeper water. This isn’t enough to make it an off-roader by any stretch, but it does have plenty of capability for rougher dirt roads and trails.

Adding extra suspension height lets the Cross Country’s body roll more than the standard V60 in corners, but it is still well-controlled. In exchange for that roll, you get a ride that is more compliant and, in turn, more comfortable on rough pavement and unpaved roads.

Volvo’s bodywork changes are largely for the sake of appearance. Yes, the bare plastic wheel arches and bumper strips might be able to take some light trail debris without stripping paint, but they will still get scratched.

The car also has plenty of shiny paint directly around the plastic. Still, this look is what crossover buyers want; so, if the cladding helps keep one more wagon on the road, it’s a good thing.

Misses Out on V60 Plug-In Power

What the Cross Country doesn’t offer that the standard V60 does is a plug-in powertrain. While the CC gets that B5 mild hybrid, the regular V60 gets Volvo’s Recharge PHEV driveline.

Ultimate adds comfort features like Harman Kardon audio, front seat ventilation, and a head-up display to the already high level of kit in the Plus grade.

The point of a crossover is to deliver SUV-like utility with car-like ride and handling. That definition makes this Cross Country sort of a crossover again, attempting to bridge the already small gap between crossover and wagon.

Ignore the labels and you’ll find a vehicle with loads of cargo space, rough-road capability, and driving dynamics. Importantly, this also includes visibility. All of these are attributes you’ll struggle to match in a more conventional crossover or SUV.

With the V60 Cross Country, Volvo has created a sweet spot, and this wagon is just that — a sweet spot to be on the pavement or off. For more, head to Volvo Cars USA.