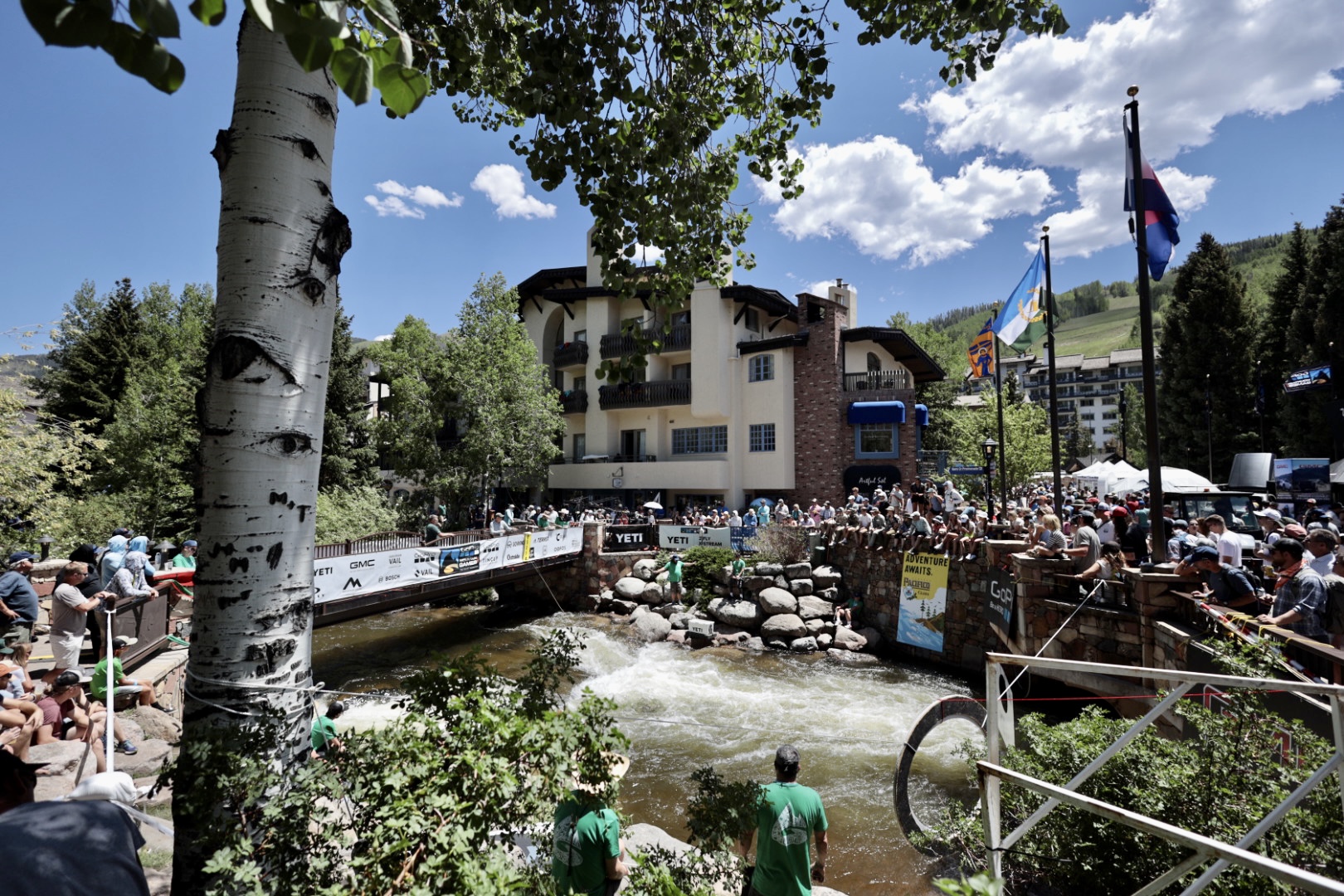 To call the GoPro Mountain Games frenetic may be an understatement. The 20th anniversary of the all-things-outdoors festival in Vail this past weekend offered an array of sports, activities, and music that stretched for 6 days.

Hundreds of visitors, athletes, and media streamed into Vail on Saturday for the marquee day of the festival. The crowds of attendees gathered around vendor booths to check out the latest gear from GoPro to Oakley. They strained their necks to get glimpses of athletes competing on Gore Creek and the massive rock climbing wall staged at the base of the mountain.

“This was a true return to all the vitality and excitement that have come with the GoPro Mountain Games since the event began in 2002, and we were extremely motivated to make this the best-ever version of this iconic event,” said Mike Imhof, president of the nonprofit Vail Valley Foundation, which owns and operates the GoPro Mountain Games.

Compared to the X Games, the GoPro games are more accessible to families; most events are free and less competitive. One of the unique aspects of this festival is it brings some lesser-known sports into the spotlight, such as disc golf or SUP, and gives attendees access to try them in many cases.

Here were our five favorite festival highlights from the week (and reasons why you should check them out next year).

Think SUP is tough on a calm lake? Try paddling down the Gore Creek with whitewater lapping at your ankles.

The SUP Surf Cross and Down River SUP sprint showcased just how hardcore SUP can be. These athletes navigated Gore Creek with a paddle and a lot of core muscle strength as they slipped in and out of whitewater while dodging rocks and boulders, all while fans cheered them on from the banks or bridges that span the scenic river.

There was also an area dedicated to letting kids, or adults, try paddleboarding for the first time in a controlled environment, a little less challenging than the river, inspiring the next generation of SUP racers.

The GoPro Games turned fly casting into an art form with Catch Wars and the 2 Fly X-Stream Casting Competition.

Anglers showed off their fly casting skills by catching fish and landing a fly on targets like a YETI Cooler or hula hoop from 50 feet away in front of a crowd for points and bragging rights.

And Orvis helped impart the love of the sport to the next generation. The Orvis Kids Cast & Catch event helped kids learn how to cast. Orvis also had some of its new Helios rods available for visitors to test out and cast on the grass.

Just the thought of balancing on a slackline is challenging enough for the average person. However, athletes at the GoPro games take it to the next level by traversing a slackline over Gore Creek.

Fans got close enough to see the concentration in the slackliners’ eyes as they deftly maneuvered across the river. And while they may have had a safety harness leash to catch them if they fell, the tricks they pulled off were more than impressive.

From swaying back and forth on the line, or “surfing,” to hanging upside down from their feet like a bat, these athletes put on a show for the crowd.

The GoPro Mountain Games may be the most dog-friendly event ever. There’s an entire area at the games called “Dog Town” where pups compete in various competitions from Dueling Dog to K9 SuperWall.

In addition to the official competition, there were pups everywhere at the games — dogs wearing goggles, dogs in backpacks, dogs in bike trailers, and lots of dogs cooling off in the river.

If you’re a dog-lover, or just want to bring your furry friend out to a fun event (Kong dog toys is a major sponsor), you can’t beat the GoPro Mountain Games.