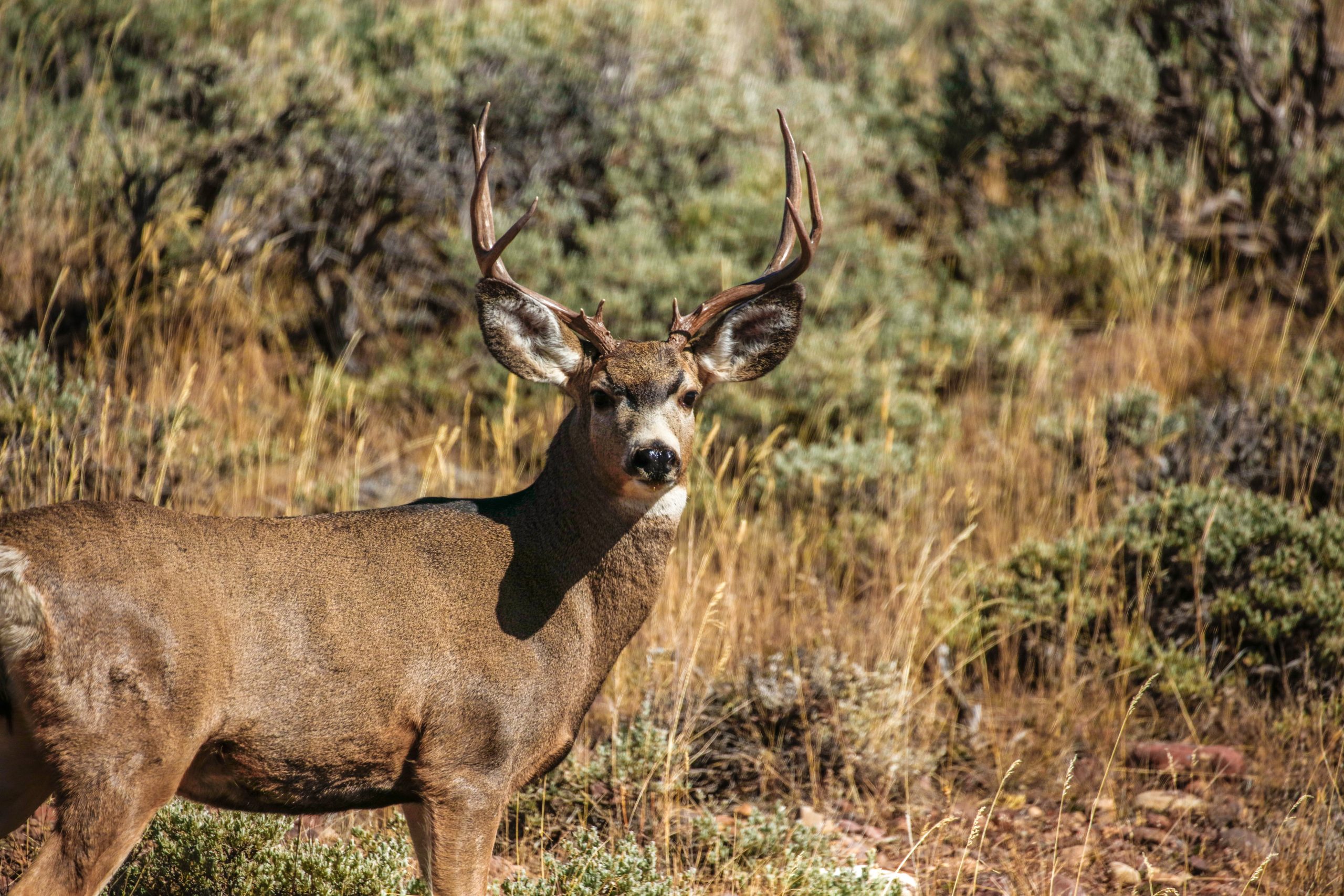 Deer’s Looking at you, Kid

When I got my hunter safety certificate several decades ago, experienced hunters talked about tree stands like they were a cloak of invisibility. “Deer don’t look up,” they would say. “You’re up in a tree stand, you don’t even need to wear camo.”

Maybe that was true twenty years ago, but I’ve got this theory that we’re helping whitetail deer rapidly evolve by facilitating the process of natural selection. This is especially likely in the American far northeast (Maine, New Hampshire, and Vermont) where there are an abundance of skilled, dedicated hunters and a relatively small deer population.

What happens when you mix lots of good hunters with a handful of deer? Well, for starters, the low IQ deer get eliminated pretty quickly. The concentration of hunters in the New England woods is high enough that any dumb deer is going to get picked off on opening day. This leaves the smart deer behind, and according to Darwinian micro-evolution and the laws of natural selection, we’re essentially prioritizing traits that lead to deer intelligence, while culling deer who lack those intelligent traits. The intelligent deer will then reproduce and pass along whatever genetic traits lead to higher deer IQ to their young.

Deer are also great at passing knowledge and experience on to the next generation. Since fawns and yearlings often stay with their mothers throughout their first year, a wise and savvy doe can train her descendants to avoid common hunter traps. If those descendants are already survival-selected to have a higher IQ, then the process of hunting deer naturally gets harder and harder as the deer population increases in brain power. Will the future have “super deer,” bred to an intelligence level rivaling dolphins and chimpanzees?

I can’t prove it, but I’m pretty sure deer are now able to read “No Hunting” signs since they do such a good job of migrating to the plots and parcels where we’re not allowed to hunt them. Just wait til 3021 when deer can use phones and download the onX app.

While this is all speculative, what we do know is that deer can and will look up and spot you in your tree stand. I’ve personally had it happen to me, and many hunters can confirm similar experiences.

Getting busted in your tree stand is never fun, and it’s especially annoying when the deer sees you, even when you think you’re wearing the best camouflage on the market. So what can you do if you find yourself hunting intelligent deer that know to look up? Here’s a few tips:

While it seems that many deer now know to check the trees, no deer is going to be craning their neck for “stargazing” or “bird watching.” Naturally, the higher you go, the greater your chances of being undetected. I’ve come across tree stands that are 8 or 10 feet off the ground, and that’s far too low. The minimum should be 12 feet. 16 is better, and if you can reach 20 or above, you probably won’t get spotted.

Of course, you should only ever go as high as you safely can based on your skills and abilities. It’s better to have a bad fall season than a bad fall. It goes without saying that anyone using a tree stand should also use a safety harness and be securely tied off in case of an accident or tree stand failure.

I’m a huge fan of the Hunter Safety System lifeline. It allows you to be tied off from the moment you leave the ground, and with a 30 foot length, you can climb high with confidence.

If you got spotted, it’s probably because you moved, and the single best way to limit movement is to be comfortable in your tree stand. I know, I know — part of us wants to embrace the Spartan lifestyle of eschewing comfort and celebrating hardship. But even the toughest one among us will start fidgeting and adjusting if confined to an uncomfortable position or awkward surface for long.

Just like in long distance precision shooting, you want to get your body into as natural a position as possible where all major muscles are supported by skeletal anatomy and you aren’t holding yourself in a stress posture.

You wouldn’t spend a day in the office sitting on a metal grate, would you? If your “day in the office” involves meetings with deer, find something a little closer to comfort.

When I hunted deer in states with burgeoning deer populations, it was common practice to pick a spot for a hunting stand by locating a great vantage point with 100 yard views in every direction. You’d simply locate a nice, centrally-located tree overlooking broad swaths of woods and fields, and then wait for low-IQ deer to stroll through and turn broadside.

Things aren’t quite so simple in states with pressured whitetail populations or sparsely populated woods. If you put yourself out in the open, the deer will spot you, no matter how high you climb or how still you stay.

When picking a spot overlooking a deer food plot or travel corridor, hunters are tempted to do two things: 1) position their tree stand directly facing where the deer will be and 2) clear brush, branches, and saplings to create generous shooting lanes.

While both of these acts seem like they’re preparing you for the perfect shot, you’re also “opening the blinds” (I’ll let myself out now.) to scrutiny from deer who will see you and retreat long before you ever see them.

It’s tempting to try to engineer a situation where you have a crow’s-nest vantage point, capable of covering every part of the woods, but in tough whitetail states, that’s a fantasy. Most deer in New England are shot within 50 yards, and the reason is that successful hunters must get deep into the cover where the deer like to stay.

When positioning your tree stand in regions where deer like to look up, sacrifice the view for cover. You might not be able to take every shot due to branches or concealing features, but at least you’ll have a chance of seeing deer before they see you.

Even a few hemlock branches crossing in front of your field of view can do wonders to break up your outline and help you blend into the forest backdrop. It’s a balancing act — clear enough cover so that you can take a few good shots, but leave enough so that you’re not out in plain view.

And if that doesn’t work, you can always get one of those tree stand blind covers — combining the concealment of a blind with the high ground of a tree stand.

If you get busted in a tree stand by a smart deer, should you go back to the same spot the next morning or evening?

In a state with a large population of dumb deer (Hint: it starts with V and is allegedly a great place for lovers.), you can count on them coming back, but in the northeast, getting busted means you should probably give that stand a break and either reposition (if it’s a climber) or move to a new spot. At this point, you know where the deer thinks the danger will be, so you can play that knowledge to your advantage.

This could be problematic if you start hunting season with only one fixed stand. It’s a good idea to either use climbers that can be relocated at will, or have several fixed stands set up that you can rotate between — with an emergency stand in the garage to throw up in case your spots don’t turn out as well as you thought they would.

The best analogy for deer hunting I ever heard (and unfortunately, I can’t remember the source — if you know, let me know!) is that being a hunter is like being a clumsy and blindfolded assassin, blundering around someone else’s house, trying to kill them. The homeowner (the deer in this analogy) knows you’re there and can’t get rid of you for some reason, but they find it easy to go around their daily life avoiding you. They hear and see you coming and quietly move to a different room. Most of the time, you’re just bumbling around in a spare bedroom they haven’t visited for days. Then one day, they open the fridge to get a snack and you jump out and kill them.

Deer will always out-sense us and have that home-team advantage in the woods. But at least — for now — we have a higher IQ and can formulate a plot to overcome our disadvantages.