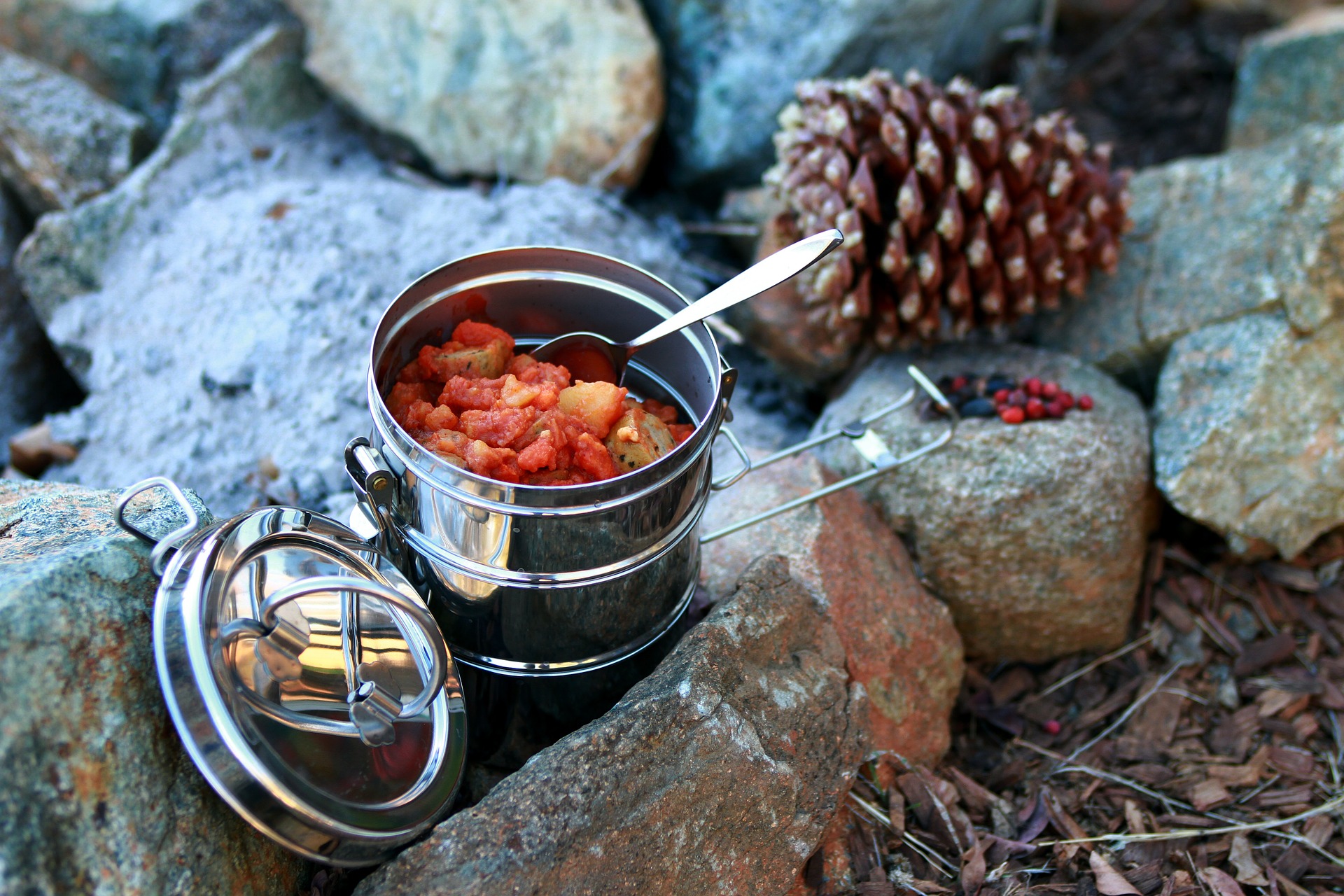 How long can you subsist on beef jerky, granola bars, and trail mix before your body demands a real meal?

Mountain House and Backpacker’s Pantry products are great, but what else could you use from a regular supermarket? It’s no secret that specialty foods marketed to the outdoor community have a high per-calorie markup, so what standard groceries could we repurpose as camping food?

To set some parameters, here’s what I’m looking for in a camping food. Ideally, it should be:

We’re not going to talk about snacks, because any snack is great for camping, and you probably don’t need any help thinking of which snacks to bring. We’re also not going to talk about Ramen Noodles, Spaghetti-O’s, Vienna Sausages, or anything in that category. Yes, these technically can be efficient camping foods, but we’re going to try to reach a slightly higher strata in the chow hierarchy, starting with:

If you don’t think butter is a food, then you’ve probably never been to Antarctica. Eating raw butter is a proven technique for maintaining energy and body mass in extremely cold environments and during times of demanding physical hardship.

Butter is also one of the most versatile and useful condiments, and bringing it to the camp can transform “eating” into “dining”. It’s one of the few condiments that has real nutritional value, with both healthy fats and protein.

These packets are neat and portable, and don’t need to be refrigerated for short-term camping trips.

Butter can be used for cooking, can be a topping and seasoning, and can even be added to coffee  for a morning boost. One of the great things about butter is that the fat content slows the sugar release of fast-metabolizing foods, giving your body more stable energy instead of energy spikes and lows.

At the time of writing, you can get a case of 720 butter packets for $36 from Webstaurauntstore.com. If you need more than that for camping season, you’re probably Julia Child.

Ben’s “Ready Rice” packets are one of my top go-to camping staples. While the packets are designed to be microwaved, they’re easily heated up over a campfire. Simply empty the packet into your cooking pot, add a drop of water (and butter, if you’re following along with this list) and stir frequently to avoid sticking. After a few minutes, you’ll have hot, flavorful rice.

The rice has plenty of nutritional value alone (7 grams of protein per packet), but you can boost the numbers by adding a can of beans, or even canned chicken breast. Canned chicken breast is fairly unappetizing by itself, but when heated up and mixed into a serving of rice — well, as Carl Weathers would say: 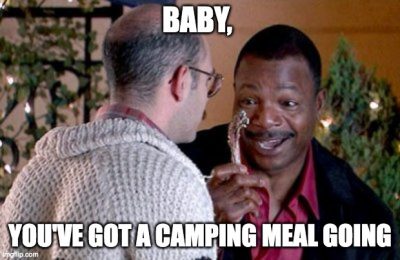 Ready Rice is inexpensive, with packets available from most grocery stores at around $2.

Did you think yogurt squeeze pouches were just for kids? Think again. Dairy is an essential food group, but it’s a hard one to bring along on camping trips, as it’s usually perishable and rarely portable. My goal is to have three dairy options on this list, and with butter as the first, yogurt would be the second.

Not only is yogurt rich in nutrients; it also has probiotics, which are beneficial when sanitation is limited and nature’s microbes are prevalent.

Yogurt squeeze pouches make a great on-the-go snack, but if you have a little more time, the contents of the packets can be mixed with nuts and fruit for a camp-ready parfait.

Yogurt packs are approximately $1 each; cheaper if you locate a store brand.

There’s nothing better than waking up to a breakfast of hot bacon, but dragging a pound of raw bacon through the woods is not something I’d recommend. That’s why shelf-stable pre-cooked bacon is such an amazing camping option.

Preparation is ridiculously easy — what I do is simply drape the strips on a stick and hold over the fire. Since the bacon is already cooked, you only need to keep it on for a few minutes to reach an ideal temperature. It’s fairly pliable out of the package, but you can get it nice and crispy if desired. 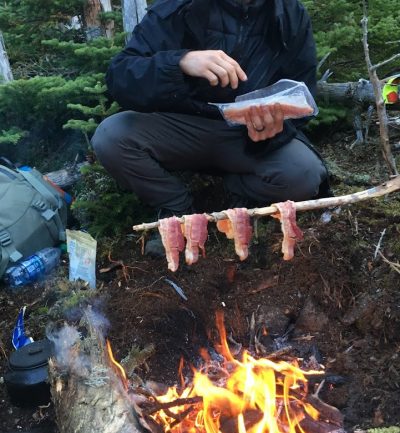 A pack of pre-cooked bacon costs between $4-$6, and can be a great addition to breakfast, lunch, or dinner. Note: Once opened, the bacon should be consumed in one sitting, as it needs to be refrigerated after opening.

We’ve all probably taken a can of tunafish camping at one point or another, and while it’s not the most appetizing thing, it can be a great way to quickly ingest copious amounts of protein. If you’re willing to eat Tuna, these packets are ideal because they have even less weight and bulk than a can, and don’t require any can opener. They can be spooned out and heated, or eaten straight from the packet with a spoon.

As a bonus, they’re very cheap — usually around $1 per pack.

Tortillas are an easy and versatile bread substitute to bring camping. They take up significantly less space than a loaf of bread, and you don’t need to worry about them getting squished (pre-flattened, for your convenience!).

If I eat hotdogs while camping, I almost always wrap them in tortillas instead of a hot dog bun. Tortillas can also be a great companion to Mountain House scrambled eggs and bacon for an instant breakfast burrito. There’s not a lot that you can’t eat as a wrap, including other items on this list (turn the ready rice, beans, and chicken from #1 into a dinner burrito, for instance).

They can also be eaten plain or toasted with butter, and if you want to make some chips, you can drape a tortilla over a stick until it gets warm and crunch enough to crack into pieces.

I promised three dairy items, so here we go. While there’s some debate, experts agree that Parmesan cheese does not need to be refrigerated.  If you remember reading Treasure Island, you may recall that Dr. Livesey always carried a piece of parmesan cheese around in his snuff box — an important plot point in the book, and possibly a thing people did back in Robert Louis Stevenson’s day.

Whether or not you plan to battle pirates while camped out on a tropical island, Parmesan cheese is both a delicious topping and snack. Growing up in an Italian household, a block of cheese and grater were ubiquitous at every meal. My siblings and I would always cut off generous slices and eat them plain.

After a day of strenuous sweating, the salt content in Parmesan will be a welcome refreshment.

A block of Parmesan cheese can be found at any grocery store for about $5-$7.

Pepperoni — whether pre-sliced, or in log form — is a great culinary addition that’s easy to bring to the camp. When sealed, pepperoni doesn’t need to be refrigerated (though once opened, you should plan to consume all of it within a few hours).

Pepperoni would make a great pairing with two items already on this list — rice and parmesan cheese. Mixed into rice, you can transform the dish into a kind of camp gumbo. Chunks of Parmesan cheese and Pepperoni make great toppings for crackers.

I haven’t managed to do it yet, but there’s probably a way to make “camp pizza” using tortillas as the crust, and pepperoni as a topping. It’s only a matter of time before I figure out how to do this, but you’re welcome to try and beat me to it (or let me know if you already have).

Packaged pepperoni costs between $3-$5 per pack.

Potatoes  (Sweet, yams, or the regular baking kind) are one of the few offerings from the produce aisle that both don’t need refrigeration and won’t get mangled in a bumpy backpack ride.

There are two ways to cook potatoes in an open fire — first, they can be wrapped in foil and rolled onto hot coals. But, if you don’t have foil, you can actually put the potato directly into the hot coals. You won’t be able to eat the skin, but once you peel back the charred outer layer, the potato flesh inside will be hot, soft, and ready to scoop out.

WARNING: No matter which method you use, it’s very important to cut an X or poke holes in the potato and foil before placing it in the fire. Without a release vent, superheated vapor under the potato’s skin can generate enough force to explode, throwing scalding potato chunk shrapnel at you and innocent bystanders.

Combining a camp baked potato with the butter and bacon bits previously mentioned on this list would be a filling and satisfying meal to enjoy in the wild.

Potatoes are usually less than $1 per pound.

I’ve only recently started seeing these ready-to-eat Quinoa salads at my grocery store, but they might be the healthiest thing on this list. Quinoa is extremely nutrient dense, and these are great for a quick meal that requires no prep.

I’ve seen multiple flavors available, but my favorite so far is the Basil Pesto variety pictured above. You could also add some more of that Parmesan cheese for extra flavor.

So, there’s ten options that aren’t junk food or specialty back country food, and there’s probably many more. The next time you’re at your grocery store, scan the aisles for other products that would make great, unexpected camping meals — then share your ideas in the comments below!