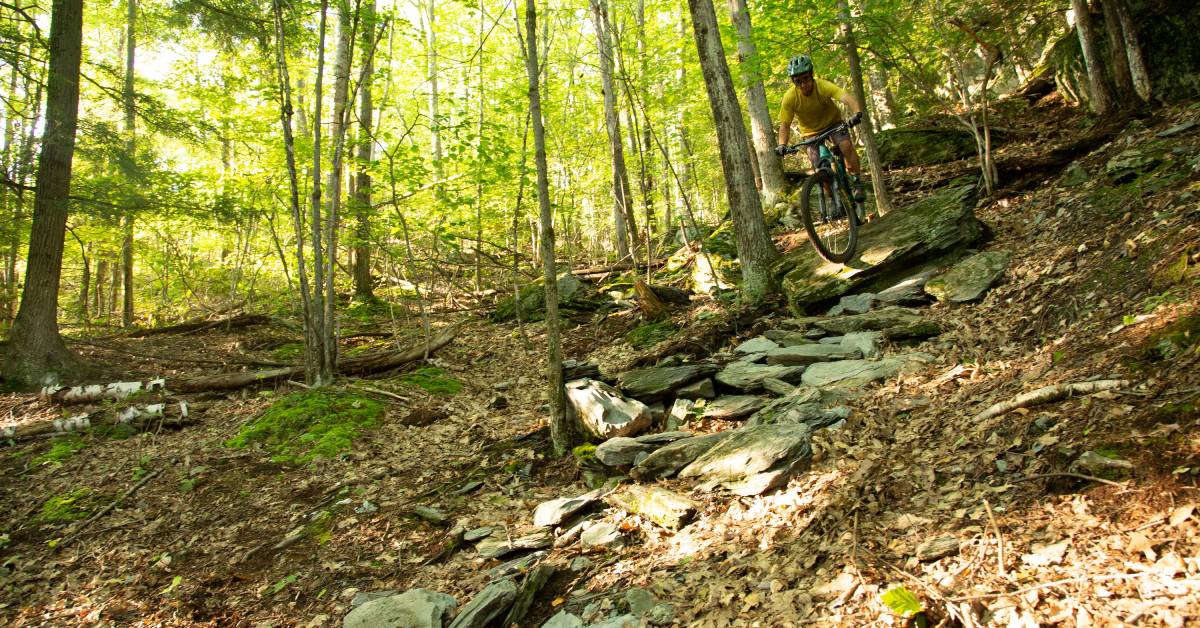 There are a lot of good e-mountain bikes on the market, but none that I would have considered buying as my only bike. That’s until I rode Yeti’s 160E, a pedal-assist mountain bike that rides like a regular mountain bike on downhills, while also making you bike like a 21-year-old pro, just fitter and more awesome.

When I hopped on the 160E the first time, I could have sworn I was riding Yeti’s SB150, which is Yeti’s time-tested and race-proven enduro bike. This 160E was nimble climbing, high performance descending with extra power and extra torque to get me through a 34-mile ride outside Yeti’s headquarters in Golden, Colorado — all without acclimatization the day I arrived there from the East Coast.

The bike climbed singletrack with the same precise-steering agility as Yeti’s SB150. And, it carries a whole lot more juice than my legs will ever dish out. On downhills, it was as responsive and easy to steer as my SB150, and the low center of gravity makes it even more stable. I landed jumps and rode technical terrain aboard the 160E that in some cases I hadn’t yet tackled on my “normal” bike. 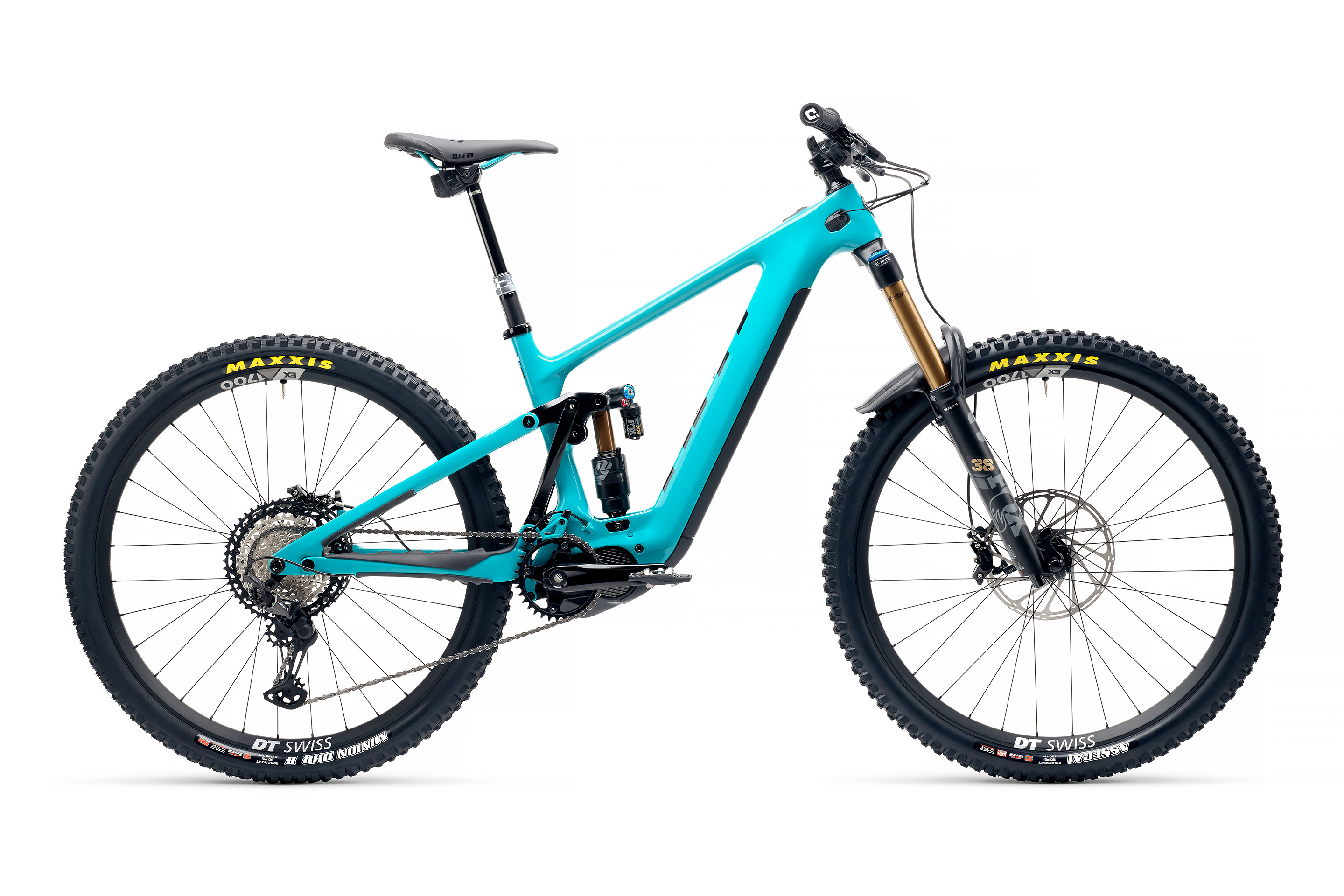 As a race-focused brand, Yeti wasn’t willing to compromise on ride feel, so it developed a new six-bar suspension for its e-bike. Yeti’s calling it “Sixfinity,” which should address the added power, weight, and unique demands of an e-bike. It integrates with the Shimano Steps battery and motor system and mimics the feel of Yeti’s beloved Switch Infinity.

“We wanted to build the fastest bike out there for our race team,” said product manager Ryan “Rocket” Thornberry. “Sixfinity suspension builds on a lot of similarities in terms of what we’re achieving kinematically as Switch Infinity. The six-bar layout can be infinitely tuned.”

Similar to Yeti’s Switch Infinity linkage, the Sixfinity switches direction as a rider gets deeper into this bike’s travel giving the bike Yeti’s signature “bottomless suspension” ride feel, while accommodating the weight and speed that comes with a motor and battery.

It seems curious that making an e-bike that rides the same as a brand’s existing bike should take a full suspension design overhaul, but riders have different habits e-biking, and there are different dynamics at work.

On an e-bike, a rider pedals seated more than on a pure pedal bike, both uphill and downhill, and the bike accelerates faster. There’s also a lot more mass moving forward that the brakes have to manage without the front end diving. 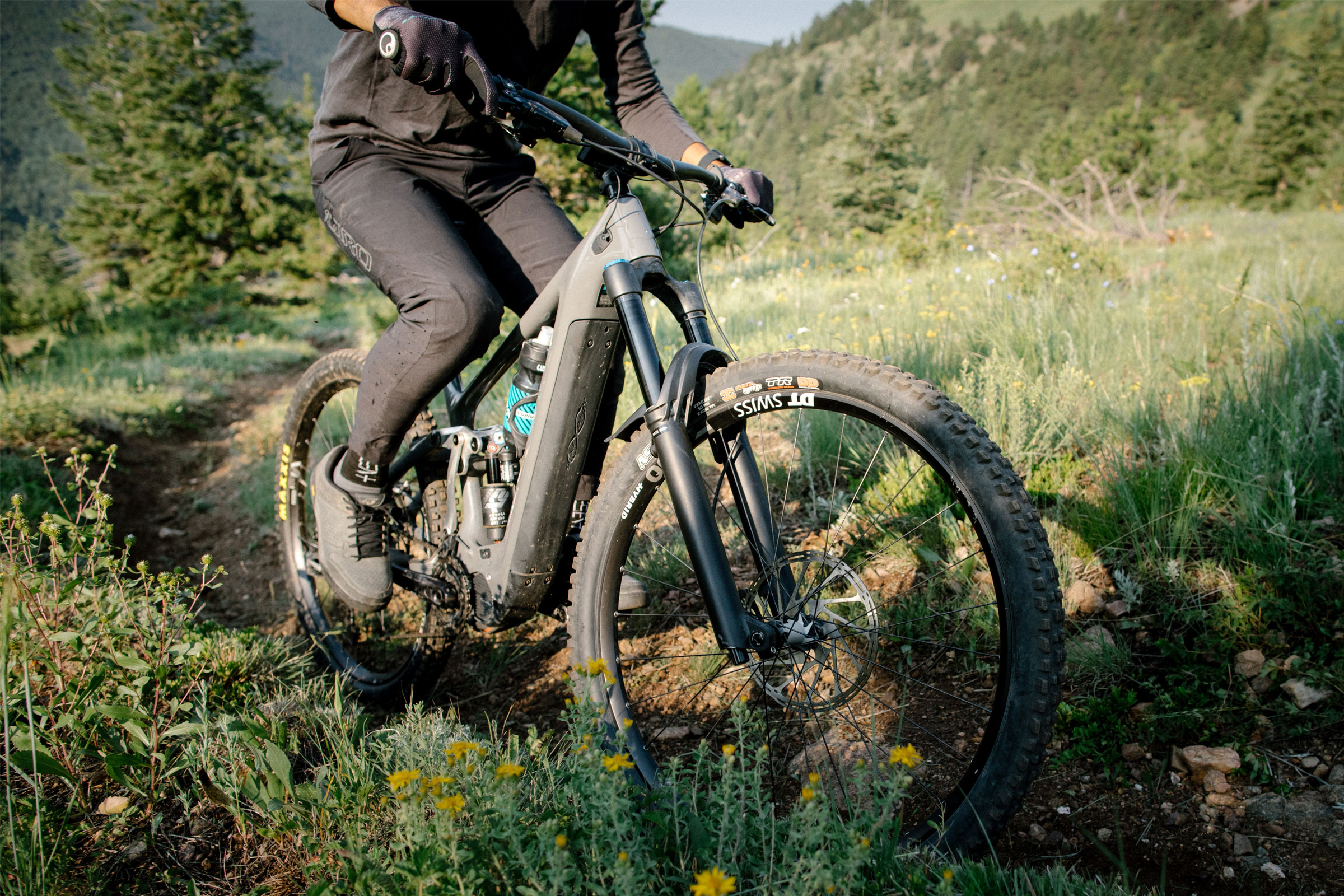 On e-bikes, you’re not often climbing in the granny gear, and consistent torque has to be accounted for. With Sixfinity, there’s a broad flat band at the sag point when you’re climbing, which means no bobbing around. And deeper in the travel, like when you get some air then land your jump, chain forces don’t affect the suspension.

Yeti also kept the anti-squat high to eke out all the efficiency and stability the bike could offer.

“On a moto, you have all the power and you’re limited by traction,” explained Peter Zarkowski, Yeti’s head product engineer.

“On a bike, you have good traction but limited power. An e-bike falls somewhere in between,” he said. “So, we’re trying to reduce magnitude of the anti-squat vs. pedal bikes. We want to keep it very consistent in the pedaling band, and very consistent in any cog in the cassette, between 100% and 109%. By doing that we’ve biased towards more traction and more comfort.”

Yeti 160E Review: How It Rides 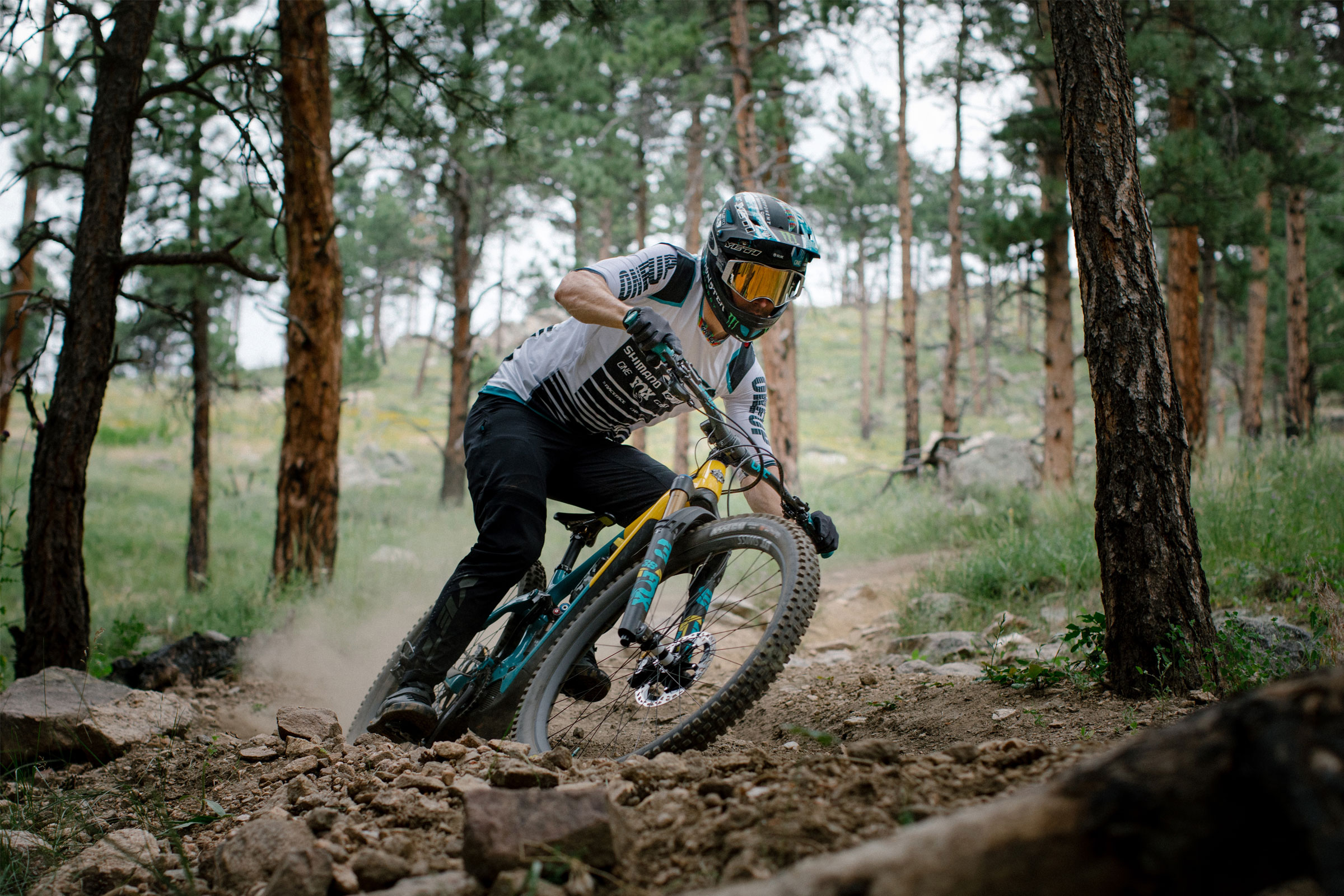 If that’s all confusing and you just want to know how the bike rides, the answer is that it’s unbelievable. I’ve had it for 3 months and have loved every ride.

The biggest challenge was learning to ride technical singletrack uphill, which takes practice because you ratchet differently going over rocks and roots and tight spots, and because you have to figure out which of the bikes three modes best suit the climb.

Now, in addition to a dropper lever, my left hand needed to pick a mode, and to switch between modes. On downhills, the planted feel made me smile so hard it hurt.

Yes, it’s an e-bike, but riding the 160E is still a workout. I’m in good riding shape, but my legs and my arms were sore in new places the first few days of riding the 160E. It’s not like there’s a throttle and the rider just sits there. Moving the bike aggressively takes strength.

And I was able to cover a crazy amount of terrain. On one ride in Vermont, I pedaled 17 miles and over 3,500 feet of climbing, including a double black diamond downhill. It took me 2 hours.

Another point of praise: The Yeti 160E has amazing range. The 630 Wh battery and Shimano Steps systems delivered comfortingly consistent power without the surgy feel of some other e-MTBs.

Yeti includes the slowest Shimano charger available with this bike — it takes 12 hours to charge from dead to full, which preserves the battery life and gets riders the most miles out of this bike over time.

The 160E also includes a leverage rate flip-chip that noticeably changes the ride quality of the bike. If you like a ride that’s super plush off the top and gets playful the harder you ride, run the chip at 35%. If you prefer a ride that’s racy and consistent across the full spectrum of travel, run it at 25%.

Or choose the middle 30% for the best of both worlds. The choice of settings will let riders who are particular about their suspension feel precisely dial in their ride.

Before I rode this bike, I thought that all 50-ish pound e-MTBs would have the same dead feel. But Yeti has used the ramp up of the spring rate to keep bike poppy and playful, while at the same time predictable and consistent. The shocks are easy to tune, especially using Yeti’s superb online shock calculator.

Other e-mountain bikes have failed to “wow” me.

Adding a battery and motor to a mountain bike makes it a lot heavier. A Yeti SB150 weighs around 30 pounds depending on the build. A Yeti 160E weighs around 49 pounds. The extra pounds effects how the bike feels when you’re braking, when you’re jumping, and when you’re riding technical terrain.

And adding a battery and motor near the bottom bracket can interfere with suspension design, forcing chainstays to be longer, and compromising the way the bike feels both when you’re climbing and descending.

When I loaned it to an enduro racing friend, he said, “This is awesome. It feels just like my normal bike,” before he aired off a massive gap jump.

The Yeti 160E comes in S-XL. All frame sizes are water bottle compatible, though the smallest size requires a pretty small bottle. (Yeti actually had Colorado-based Polar make a custom 15-ounce bottle for that one.)

The bike has excellent standover height, and the ride is nearly silent thanks to captured cable ports and ribbed chainstay guards. The derailleur attaches with SRAM’s universal derailleur hanger.

The bike ships with Yeti’s new U.S.-made thermoplastic handlebar, specifically designed to combat harsh vibrations riders experience at high speeds. The material and manufacturing allows for the bar to more efficiently dissipate energy that would otherwise be transmitted to the rider.

The e-specific bar has internal routing and a clear powder coating.

The 160E has a 64.5-degree head angle, 78-degree seat tube, and 446mm chainstays. It has clearance for a 2.6-inch tire clearance in the rear. It can run a full-length dropper, and it’s been tested to a DH standard.

The bike is dual crown compatible. Custom guards protect the frame, and the fork clears the downtube on all sizes. A rear mud fender protects motor and linkage. If you want to run your brakes moto style you can, thanks to the open downtube.

“Our goal is to look with a fresh set of eyes,” said Zarkowski. “It wasn’t worth it to us to make an e-MTB unless we could make it better.”

Check Price at Yet Cycles

The Best Mountain Bikes of 2021

From hardtails to all-mountain rides, we found the best mountain bikes for every riding style and budget. Read more…